“I need to make sure we’re strong in all departments, so we’ll look at who we bring in,” he said. “One or two are possibly due to go as well, but our focus is on the next few games.

“David Holdsworth is on with speaking to Anthony Gerrard and Jack Sowerby. I leave all of that up to him, but hopefully we’ll get good news on both of them. Jack is here until the end of the month, but I know he’s enjoying himself. We’ll respect what Fleetwood want with him as well, but he’s a player we would like to keep.

“Adam Campbell has returned to Morecambe. He’s a player who needs to be playing football. When you’re a young lad, at his age, you need to be on the pitch. He’s been unlucky that he’s had one or two in front of him, but he’ll always be a player and lad I like.” 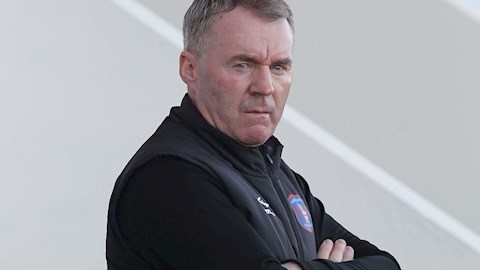 MANAGER: It was a really good team performance

And the gaffer confirmed that offers had already been tabled to add to the squad ahead of this weekend’s game against Mansfield.

“We’d like to get one or two done before Mansfield, if we can,” he said. “People know me, and they know what I’m like, so I’m hoping they’ll want to come.

“I’ll be trying to fill areas I think we need to strengthen. I’ve made offers to a couple of players and hopefully we’ll get them sorted quickly.

“With Mike Jones and Richie Bennett, I completely understand where they’re coming from. I would never stand in anyone’s way.

“If I was a player I’d want to be playing, that’s just part and parcel of football. They’re all good lads, so if it benefits us, and it benefits them, we’ll try and do the right thing.”