United boss Steven Pressley spoke more this about the absence of Gary Liddle following the results of a second consultation about the knee injury he picked up during training at the back end of last week. 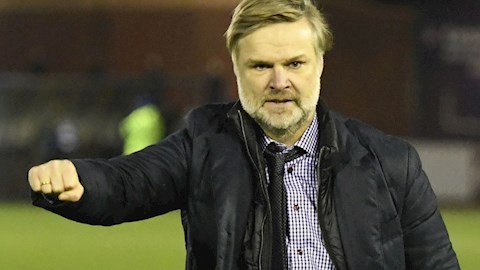 MANAGER: It's been a smooth transition

“We have a situation with Gary where the way he feels is not a direct correlation to his scan results,” he said. “It was a knee injury he picked up during training on Friday and the results from the initial scan weren’t the most positive, but he feels very good.

“He’s a resilient character and he doesn’t generally miss training or games. He spoke to a surgeon on Wednesday and there are a couple of procedures we now need to go through, but we’re hoping it’s short-term rather than long-term.

“We’ll have to see how things go before we start talking about timeframes. In his own mind he was ready to run yesterday, because that’s how he is, but we don’t think that will be the case.”

“There isn’t a lot of depth in personnel at the back just now because, as you know, we’re losing Macaulay Gillesphey to a knee operation next week,” he added. “He could be out for six to eight weeks – we’re not entirely certain on that at this moment in time – so he could miss a big chunk of the remainder of the season.

“Like I say, having small numbers in that area is a concern for us.”

And explaining how that might affect January recruitment, he said: “We had real areas we were going to target, having spoken about it over the last week or so, but we’re constantly assessing and reassessing our needs.

“As things stand there’s no doubt we’ll need to bring in one defender, but we could possibly even consider two.

“We certainly need another striker, possibly one more additionally in that area as well, and another midfield player.

“The other thing was that we had a little problem on Tuesday with Tom Parkes and his back. It took a little spasm but he’s another resilient character and we’re hoping he’ll be ok. As a precaution he didn’t complete the session, but he was fine yesterday and that seems to have settled down.”