United boss Steven Pressley watched his side notch up their fifth consecutive home win on Saturday as second half goals from Jamie Devitt and Hallam Hope took them to fourth spot in the League Two table. 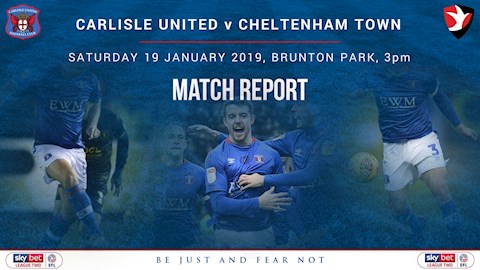 Speaking about the victory after full time, he said: “I can’t speak highly enough about the group of players. I spoke to them before the game and the one thing I emphasised was that we can work towards a tactical plan, but the real winning of the game comes from the players.

“We saw all of those qualities in abundance from every one of our players in Saturday’s game. The lads were terrific, and I told them at half time that all they had to do to give themselves the best chance of getting a result was to continue to believe in the way we were playing.

“It needed a couple of little tweaks, but they were outstanding in the second half. Opportunities started to come as the game opened up and we were very effective on the counter-attack. I’m really pleased for them because they’re a great group of players, and it was very important after our setback last week that we got ourselves back on track.

“I have to say, Cheltenham are a better team than their league position shows, and I really mean that. I’ve watched a lot of League Two football and I think they’re one of the most effective teams with the ball.

“They’re also very good on the transition and that’s why it was important that we didn’t lose concentration.”

On seeing a clear desire from all of the players to impress the new boss, he said: “That’s a normal response when a new manager comes in.

“You always hope that you’ll get a reaction and I’m pleased that was what happened. As I’ve said before, prior to me coming here the team had won six of their last seven games and they were playing some really positive football.

“I think we all know, one of the things that will be crucial, if we are serious about getting promotion this season, is winning our home games. This result was a real step in the right direction for that.”

With both of the goals coming in the second half, he explained: “Half time was a good chance for us to make three or four observations about what we wanted from the next 45 minutes.

“Football games can be tight encounters for 55 or 60 minutes, and that’s when the game begins to open up. We made sure we stayed compact and tight and the good chances started to come our way.

“Although we did make a few minor tweaks, and added a couple of tactical moves for when we were out of possession, on the whole it was just a case of asking them to carry on the good work. All-in-all it was a good outcome for us and the boys should be really proud of their work.

“Importantly our front three players were very effective. Jamie Devitt grew into the game – I asked him to play a slightly different position, as a false number 9 – and I thought he was terrific.

“I know he likes to play in the number 10 position, but I asked him to stay a little bit higher in the second half in order to create a little bit more space for our other midfield players. His work ethic was terrific, and the second goal comes from him pressurising the game.

“His pass was superb, and it was a really composed finish from Hallam. Dev has been singled out here, but it was an excellent team performance.” 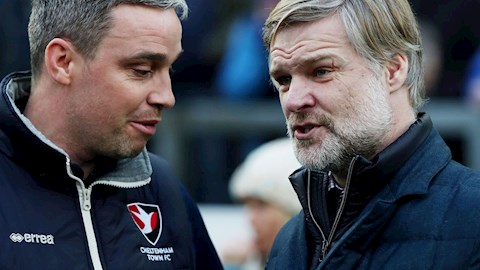 The shut-out was United’s ninth clean sheet of the campaign, with the defence receiving particular praise from the former-Scotland international centre back.

“The one thing I was very much aware of before I came here was that we have defenders who can do the real basics of the game well,” he said. “It can be difficult in this league if you don’t have that, because I honestly think the basics are asked of you more at this level, but our defenders stand up to everything that comes their way.

“Clean sheets are always pleasing but the most important thing for us was to win the game. Winning breeds confidence and the defenders and keeper take a lot of pride from keeping clean sheets.”

“Gary Miller came in at right back and it isn’t easy coming into a side who have been getting results when you haven’t been playing as much as you would have liked to,” he continued. “It was disappointing to lose Gary Liddle during training on Friday, with a knee injury, but Gary Miller came in and did a great job.

“The amount of effort he put in left him with cramp, which is understandable, because it’s been a tough period. Some of the fringe players don’t play a lot of football and training can be difficult with the weather, and things like that. That means they lose a little bit of their fitness, but he stepped up and did well for us.

“Like I say, Gary Liddle dropping out of training was disappointing because I’d heard such positive things about him. The footage that I watched tells me that he’s a consistent performer.

“He isn’t a player who misses games very often and I know he’ll have wanted to show his new manager what he’s about as well. He’s one who doesn’t have to worry because I know what he’s about. Hopefully he won’t be out for too long.

“I changed things at left back because I felt that if we could stay compact we could affect Cheltenham with the speed of the counter at the top end of the pitch.

“Speed in the final third isn’t Danny’s biggest asset, he won’t mind me saying thatm so we moved him one back. He’s a big influence on the group, and I think having the other players set as they were gave us the speed we wanted in the advanced areas.

“You have to remember that Macaulay is carrying an injury at the moment and he’s played through a lot of pain recently. That had to be a consideration, because it hasn’t been easy for him.”

And on his first impressions having seen his first game through to a successful conclusion, he told us: “There was a great atmosphere and I would like to say thank you to the supporters for giving me such a warm reception.

“It’s always good for a manager to win your first game so that was a big positive for myself. I’ve seen with these fans that you can lose games as long as they see the work ethic and the desire of the group.

“I go home feeling very good. My mother and sister were here, unfortunately my family couldn’t come up because of different commitments, but my friend … because I only have one friend … was down here, so it was good for them to see us win.

“I’ve had a really nice couple of days settling in, but the most important thing is winning games of football. There’s no doubt about that because winning gives the whole club a feel-good factor.

“The key now is for us all to keep it going. It can’t be just one game, it has to continue. The standards must remain high.”