United boss John Sheridan gave us his reaction to the excellent away victory at Morecambe shortly after full time on Tuesday afternoon. 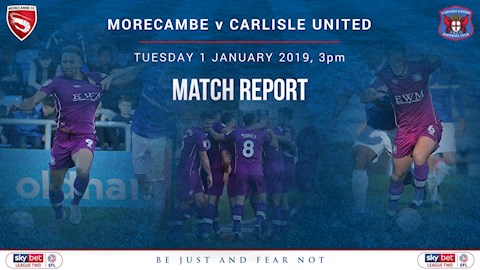 MATCH REPORT: United kick off the New Year at Morecambe

“Full credit to the players for the run they’re on,” he said. “It’s been a brilliant response because we all know the games come thick and fast through this period.

“If you can get on a good run and win games at this time of year you can quickly find yourselves right back amongst it. We were playing catch up just a few weeks ago, so we’re just clawing our way back and getting into the right area of the table again.”

“This was a really good performance on a tricky pitch,” he added. “Derby games are always difficult. Morecambe make life tough for you, but I thought we controlled the game really well.

“They’re a big team and they can be aggressive in the way they play. They get in your face and they put a lot of balls into the box. You have to be ready for it and you have to defend it, and sometimes it can get a bit ugly.

“I was comfortable through most of the game that it was going our way. I don’t think you’ll see two better goals and that set the tone for our win.” 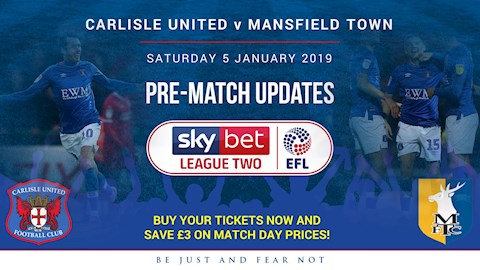 PRE-MATCH UPDATE: Handy tips ahead of the visit of Mansfield

With just under 1,800 United fans packed into the away end, he said: “Winning a game like this is brilliant for the supporters. They came in huge numbers and they’ll be chuffed to bits.

“If you’re a Carlisle fan, or if you work at the club, we all want the same thing. Everyone is on a high and this is an even better result because we did it in front of so many of our fans.

“The support we got was brilliant. I’m sure we would have brought more if we could, and you always think about the fans when it’s a derby game. You want to win for them because they get right behind the team. That’s why it’s good to see the happy faces.”

Speaking more about the type of performance needed to take the points, he commented: “It’s always a hard place to come. I’ve got a lot of time for Jim and Kenny, because they do a great job.

“They’re a very effective side when they get on top of you, but we handled that side of it well. We controlled most of the game and the goals gave us the belief that we could win it. I don’t think Adam [Collin] had too much to do and we always look like we’re going to score at the moment.

“I don’t think they troubled us in terms of chances, but they’re always dangerous in the way they play. They’ve got Kevin Ellison and Vadaine Oliver who cause all kinds of problems, but I think we dealt with most things.

“The clean sheet is another big plus and I thought we deserved it with the way we defended as a team.”

The quality and similarities between the goals was a big talking point as superb strikes from Jamie Devitt and Jack Sowerby eventually sealed the deal for the Blues.

“The first goal was a great strike and it settled everybody,” he told us. “We’ve said many a time that the first goal in this division makes a huge difference.

“They put a bit of pressure on us at the start of the second half, but we didn’t let them have any clear-cut chances and we started to look the more likely to get more goals.

“Ashley Nadesan was always a threat out wide and Jack Sowerby has that kind of shot in him. We scored two great goals and it shows that if you’re aware of potential openings you can exploit them.

“It doesn’t always have to be 10 passes to make the chance. These have both come from throw-ins, but they were two brilliant strikes. Overall we weren’t great on the eye but it was a really good team performance.

“That comes from all of the lads knowing their jobs and getting back to defend or attacking together at the right times. This is what we’ve got to do if we’re going to go anywhere.”

Another point for discussion both before and after the game was the absence of Jerry Yates, who had been recalled by Rotherham for their fixture against Preston on New Year’s Day.

“I know the script as a manager,” he explained. “When you have a player who is doing well, and he’s on loan, there’s always a chance that he’ll get called back.

“I respect Rotherham for letting us have him in the first place, and he’s been fantastic for us. He’s worked his socks off, he’s started to get goals as a reward for that, and hopefully there might still be something at the end of the line for us.

“I know he wants to come back, but he’s their player. I know Paul Warne, so if we can get him back, we’ll definitely try our hardest, but it’s their decision.”