Winger Nathan Thomas made no bones about the fact he’s here to help United with their promotion push as he joins on a loan deal from parent club Sheffield United until the end of the season. 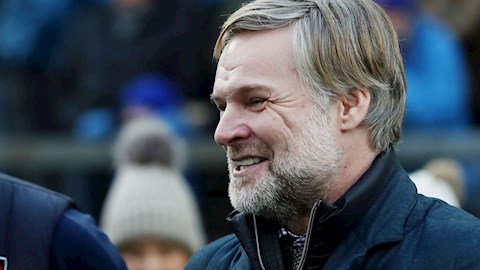 MANAGER: He's another one we're really pleased to have on board

Speaking to the press shortly after signing his deal, he said: “This is a great little project to get on board with, especially when it’s with a team that’s done really well so far.

“I’ve obviously spent the first six months of the season in a team that’s struggled, and it’s been tough.

“As soon as I found out it was an option for me to come here [on Sunday evening] I knew it was something we needed to move on pretty quickly. I’m just delighted that it’s done now.

“I’m coming to a place where I think the style of football suits me. The gaffer bases the game a lot around counter-attacking and I like to think that’s where my best football comes, in a formation like that.

“When a team is on a run like this and they’re fighting at the top end of the league, I think that persuades you enough that it’s a good place to be. There were quite a few clubs who wanted to talk but everything about being here is really good for me.

“Getting so close to promotion last season has made me hungry for that. I don’t have a promotion on my CV yet but I think once you get that taste for success it’s addictive. I’d love to do it here.”

On what the manager has said he wants to see from the wide man over the next few months, he said: “He’s told me he wants me to come in and have a positive impact on the side.

“Nobody comes in expecting to play, so I know I’ll have to push the lads who have been playing so well. Hopefully I’ll be able to add my variation of the way I play in my position to what the lads are doing now.

“My strengths are my direct running and my ability to get up the pitch quickly, so the way the team are playing at the moment fits with that. I prefer to play on the left or right side of a four, or of a three, and I’ve even strayed into the number 10 position on occasions.

“I don’t mind playing anywhere at the top end of the pitch because you work the position to your advantage, wherever you are. I play my best football when I’m part of a three as a wide forward, if you want to call it that.

“Being involved here is something I’m looking forward to and I can’t really wait to get going. It’s been a tough season on a personal level and I feel like a bit of a weight has been lifted off my shoulders now. Hopefully it’s time to enjoy playing football again.” 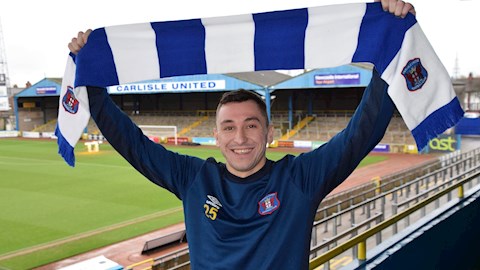 LOAN: Midfielder wings in to Carlisle

With parent club Sheffield United keeping a close eye on his progress as he joins the Blues, he told us: “I think you’re always playing for your future, wherever you are. You never know what’s around the corner and I think you’ve got to make the most of every opportunity you get.

“I recently had a little girl, she’s 17 weeks old, so obviously my priorities now are to support my family, and I’ve got to play my best football to be able to do that. It doesn’t matter where I’m playing, be it at Sheffield United or elsewhere. Football is too strange to ever second guess anything so all you can deal with is what is in front of you.”

And next up for the Cumbrians is the trip to face Crewe at Gresty Road at the weekend.

“I know all about the Carlisle fans from my time at Hartlepool,” he commented. “The rivalry was there with the clubs and we always knew the away following would be massive.

“You get some hostile environments when you go away from home and the fans who travel sometimes help to pull you through those tough games. When you pick up points on the road you know you’re sending everyone home happy, and you can’t beat that feeling.”

Having been at Meadow Lane through the first half of the campaign, he commented: “It was a difficult situation there. The club’s main priority this season was to get promoted, having got to the semi-finals last season, so the whole squad was based around going up.

“Unfortunately everything that could possibly have gone wrong did go wrong. We went through three managers in the space of three months and that in itself can be tough to deal with. New managers have new ideas and they like different players to do different things.

“I think Neal Ardley is settling on a style of playing now, which he’ll move forward with, and I don’t think I was part of that plan. To be fair I think he’s the right man to get them the results they need.

“It’s a shame it’s gone this way because it’s a really good football club. The people who work there are good people and the team is made up of a great group of lads. I really do hope they get out of trouble.”

“They’ve gone from thinking about promotion to fighting to stay in the league this year and they’re in for a really tough run in,” he added. “I think it shocked us all that we were rock bottom and we all found it really tough.

“Every player will tell you they want to be at the top of the table, not the bottom. I’ve been a part of a team that’s been relegated out of this league before and it isn’t nice. I’ve also had experience of being part of the Shrewsbury team that did really well, and the feeling of being part of a club going for something positive is so different it’s unreal.

“I do feel sorry for the boys down there because it just hasn’t gone the way it was meant to for them. I know the owner’s intentions were good and he invested the money into the team in the hope they would do well.

“Looking at it on a personal level I think it had gone a little bit stale for me down there. I hadn’t played in the position I like to play for a long time and there was a lot of chopping and changing.

“It was quite unsettling, and I think we mutually agreed that a fresh start for me was probably the best thing all round. Sheffield United agreed with that and we managed to arrange with Notts that I could be recalled. That then allowed me to be able to sign for Carlisle and I’m just delighted to be here.”