One of the most talked about Carlisle United achievements ever – right up there with the Jimmy Glass moment, in fact – was the quickest hat-trick in the club’s history, bagged by club legend Billy Rafferty as he notched three goals in the space of just six minutes to turn a home game against Cardiff on its head. 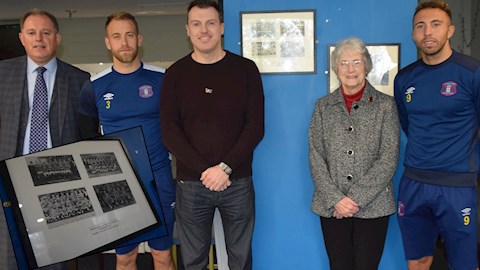 CUSG: More fans get in touch to add to Sunset Suite project

At a freezing Brunton Park in December 1976 the popular forward wrote himself into club legend as he showed a real striker’s instinct to lift a hostile crowd and to snatch victory from the jaws of defeat in the most dramatic of fashion.

Trailing by two goals as Cardiff roared out of the dressing room to give themselves a comfortable cushion after the break, a comeback of unbelievable proportions was sparked in the 84th minute when Frank Clarke got his head to a corner delivery. Rafferty pulled away from his man to get onto the end of the flick and a neat spin and shot saw him rifle a bullet of a volley into the roof of the net.

The rest, as they say, is indeed history. And that’s how the magical moment will be remembered as the man himself answered a recent call from the Carlisle United Supporters’ Groups as they look to create a club archive, much of it on display, around the stadium.

“It’s something I’ve been thinking about because it’s 42 years since the hat-trick happened,” Billy said. “The match ball has been sitting up in my loft for about 30 years now, and that seemed a bit pointless, to be honest. I saw that the club were asking for memorabilia and I felt that I would rather have it on display so that everybody gets to see it and talk about it.”

And he admitted that from what was a glorious career, which saw him play for the likes of Coventry, Blackpool, Wolves and Portsmouth, it was one of his most special moments and something he still loves to talk about.

“It really was a special moment for me and the club,” he commented. “I think a hat-trick like that is quiet a unique thing, particularly for it to happen in such a short space of time. I’ve kept my eye on it over the years and I still haven’t seen an individual change a game round like that.

“You can almost guarantee that somebody will talk to me about it nearly every week. They tend to ask me if I remember when I scored the hat-trick, and I always say that it isn’t something you’re likely to forget quickly.

“If you think about it, it’s one of those ‘Roy of the Rovers’ type moments that you’d expect would only ever really read in a comic book.”

“When I got the ball out of the loft to bring it here, I have to say that it did bring all of the memories back,” he admitted. “The unfortunate thing was that the ball was signed by all the players, but in those days, we didn’t have permanent markers, like they do now.

“I was a bit surprised to see that all of the signatures had come off, apart from Frank Clarke, who played up front with me. You can still make that one out, but the rest have all disappeared. I don’t know if that can be recovered in some way or other, because that is a shame.

“Allan Ross was always a big character and he put a fantastic message on there which said ‘pure magic Billy’ and I suppose it was a bit of magic, when you think about it.

“I looked at the ball and after talking to my wife we agreed that the right thing to do was to bring it into the club. Whatever direction the club takes in the future, it’s always going to be here, so this is the best place for it.”

But does he ever get tired of being approached about it?

“It’s a lovely feeling when people come up to you and talk about your memories,” he insisted. “It’s even nicer sometimes when I have my grandchildren with me, because I do tell them bits and pieces about my career and things that happened when I played.

“We have five grandchildren and three of them are football daft boys. I think they do enjoy hearing about what I got up to in days gone by.

“I still have so many fond memories myself and I’ve got loads of newspaper cuttings and things like that, but nothing as iconic as my ball, I’m very proud of that. I haven’t bored my grandchildren with the newspaper cuttings yet! They’re at the age now where they’d probably quite enjoy reading some of them, so I might have a look through some of those with them.” 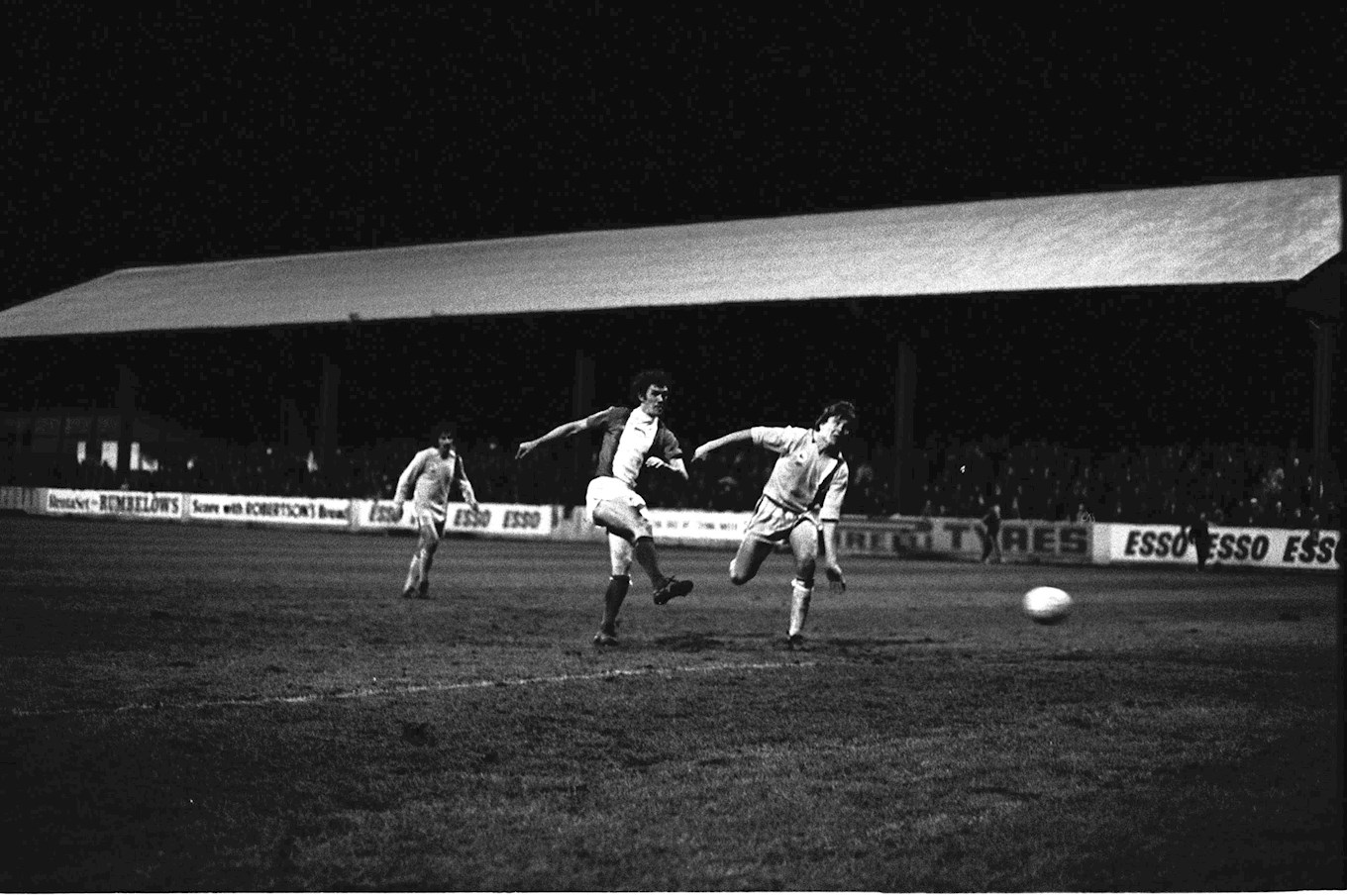 And it came as no surprise when he confirmed that looking at the ball had brought the memories flooding back about the game, and about his quickfire hat-trick.

“I can clearly remember the three goals,” he commented. “The first goal was pretty scrappy, it came from a corner. I think somebody got a flick on and the ball went up in the air first of all. Frank Clarke got a touch on it and I turned from three or four yards and knocked it into the top of the net.

“I can’t quite remember who it came from for the second goal, it might have been Mike McCartney actually, but he hit a ball over the top and I ran in behind the defender. It took one bounce and I volleyed it in from an angle into the bottom corner.

“When it got to 3-3, there was still a little bit of time left, but we didn’t really think it was going to happen. There was a long ball played to Phil Bonnyman, who ended up on the right wing for some reason, he whipped it in and I got across my defender and stuck my leg out. It deflected off me and went in.

“It was a good finish because I put it in with my left foot, after it came in from the right, so it had to come across my body and it flew in the bottom corner. It was one of those you have a go at because after the first two goals I felt as though I couldn’t miss.”

“The result was a good one because we were completely overrun by Cardiff,” he told us. “It was one of those games where they come out in the second half, and I don’t know what their manager had said to them, but they really did play very well.

“There were times in the second half where we couldn’t get the ball, but it was amazing how much a goal could change the momentum of a game. After that first goal, you could feel that we might have a chance of a draw. The goals I scored were in the 84th, 88th and 90th minute of the game.

“Funnily enough, that night was the club’s Christmas party, and we were having it in the old sponsor’s lounge. We were 3-1 down with about a quarter of an hour to go and I remember thinking that it was going to make the party into a miserable night.

“The atmosphere was really difficult because George McVitie had scored our goal in the first half, to make it 1-1 at half time, but Bobby took George off and he replaced him with John Lathan on.

“I’d forgotten about that, because I remembered talking about George making one of the goals for me at a question and answer night recently, and he just looked at me and said ‘no, I was on the bench’ which took me by surprise.

“The crowd were going mad and shouting ‘you don’t know what you’re doing’ at Bobby because George was a big favourite. It all worked out in the end, thankfully.

“I ended up being presented with the match ball at the party, and they also gave me a bottle of champagne, so it turned into a good night.

“Thinking about Bobby, he hadn’t been in the job long and I’d actually just moved into our new house in Lowry Hill, on the Thursday before the game, so I’d spent two days running up and down the stairs with heavy furniture and boxes.

“I’m not too sure he’d have been too happy about that if he’d found out. I don’t think he’d have played me.”

One almost unmissable offshoot from Billy’s hat-trick heroics was a piece of graffiti which appeared in Carlisle city centre which proclaimed ‘Rafferty is a God’ in bright colours and extremely large letters.

“It took me ages to write that,” he joked. “I knew about it because it was on the underpass between the town centre and the Sands.

“I was at a Sportsman’s Dinner at the Shepherds Inn about eight years ago and a guy came up to me to ask if I could remember the graffiti being there.

“It turned out it was him who had written it!

“It’s still there, it’s just underneath whatever it is that’s been put on there now.”

Picture credit - thank you to the News & Star for the mid-article picture showing Billy Rafferty bagging one of his goals on that famous day against Cardiff.


Carlisle United Supporters’ Groups (CUSG) will host their next meeting with chief executive Nigel Clibbens and club staff on Monday 7 June where groups will provide feedback from their members and...