Striker Mark Cullen made his first start for the Blues at Colchester at the weekend having battled back to fitness following a stress fracture picked up whilst with his parent club [Blackpool] in November. 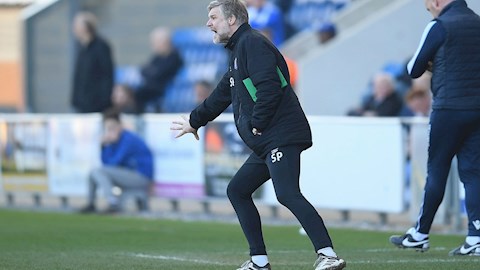 MANAGER: We needed to show more composure under pressure

His 70 minutes leading the line against the U’s brought glowing praise from the manager as he worked hard to bring others into play and to give the home back line plenty to think about.

Speaking about his performance after the game, manager Steven Pressley said: “I’m a manager who believes you can win anywhere you go, so when you’re leading and the other team aren’t really opening you up, and when you have the chance to get the ball and see it out, it’s disappointing when you don’t manage to take advantage.

“Maybe, just maybe in that last 20 minutes of the game we missed the kind of link that Mark Cullen had given us. We’ve seen from his performance why he’s regarded as a very good player, and hopefully we’ll see even more improvements in his play week on week as we go on from here.

“I thought he did really well. We were going to give him an hour, but I shouted at him and he said he’d go for five more minutes. I shouted again after that to see if he could give us more.

“You have to be sensible because sometimes you can ask too much too early, and you end up losing him for a period of time. We’ll continue to manage him because I think he’s going to be a key player for us.”

“The really encouraging thing about his performance was that he gave us a focal point in attack, and that’s something we haven’t had in recent weeks,” he continued. “He gives you a physical presence and we were able to play off him on a number of occasions.

“He tired in the second half, as you would expect with what he’s been through, so like I say, he’s only going to get better and give us more. We know his qualities and you can also see he’s desperate to do well.”

Another striking option for the United boss is Connor Simpson, who travelled with the club at the weekend.

“Connor is always in our thinking,” he confirmed. “He travelled with us, but I just felt for this game that the players I selected were suited for what we’re trying to achieve.

“He’s a young boy who still has a lot of improvements to make and we’re working hard with him on that. Hopefully we’ll see the benefits of that in weeks to come.”