United boss Steven Pressley gave us his reaction to the 1-1 away draw at Colchester shortly after full time on Saturday evening. 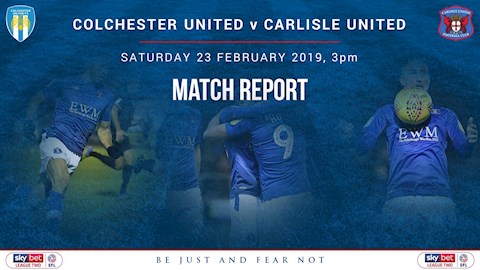 “I’m looking at it being a little bit like the MK Dons performance where we were very much in control of the game in the first half,” he said. “They did have periods of possession but we never really looked like we were going to concede, and we always looked very dangerous on the counter-attack.

“We probably had three or four of the big chances but we obviously didn’t put them away. That’s where we have to better and, with the work we’re doing, I know that will come.”

“I actually thought we also started the second half really well,” he continued. “We did a lot of the things we’d talked about for 15 minutes and then we got ourselves in front, which was from a good piece of team football.

“For me, again, we didn’t show the composure under pressure that you need through the last half hour. The changes they made were positive changes, but they were changes I felt suited us. I knew that if we could absorb the pressure, and show some composure, then it was on for us to counter-attack.

“They had a little bit of an all-or-nothing mindset at that time, but we didn’t keep control of the ball the way we needed to or in a manner that I think would have seen us through to winning the game.”

“We need to remember that Colchester is a hard place to come and they’re a very good side. Having said that, I can’t remember on too many occasions that our keeper had saves to make, and that shows we defended well.

“We had some good opportunities at the other end but, as I’ve said, I was disappointed with that last half hour. I was actually in two minds, I was going to make a change that was more defensive, but I felt that it actually suited us to have more attack-minded players on the pitch with the way they’d committed more big players to the attack.

“That was a bit of a dilemma for me but, as it went, we didn’t make the final pass or through ball well enough when we had the opportunity to do so.”

Looking more at the positives to take from the performance, he said: “Coming to these places is never easy but we dealt with their main threats very well and we had some really good performances.

“I thought Gary Liddle came back in and showed why he’s such a valuable member of the team, and it’s just disappointing that all of these good things didn’t come together to give us a win.”

A very good team display was played out in front of just over 300 Carlisle fans who once again showed their appreciation at the end of the game.

“The travelling fans never let us down and that’s something we talked about ahead of the game,” he said. “As players and managers you’re paid to come to these places and play the game, but your supporters are paying good money to come and watch you.

“That’s why we have a duty to them, and I felt the players gave them plenty to be happy about. What I will say is that the one thing we didn’t do as well, which we’ll talk about and learn from, was we didn’t react quickly enough to the initial loss of possession during the closing stages.

“Having said that, with Mark Cullen where he was and doing what he was doing, we looked very comfortable in our shape. That was a really pleasing aspect from it all. What we need to do now is take a big breath if we do come under pressure and get that first pass off well so that it allows us to counter.”

On the goal that put United ahead, he commented: “We highlighted before the game that the one thing we felt Colchester didn’t deal with particularly well was crossed balls and cut backs.

“It’s pleasing when you do score from an area you’ve worked on and that’s another goal for Hallam, which takes him to eleven for the season. He’s really producing, and I do think that coming in off the left-hand side of a front three is his best position.

“Obviously his goal was cancelled out and you do think about the missed chances and moments in the game when you should have done better after that happens to you. If we’d tidied up those moments when he had the ball at our feet we’d have had more chances.

“We know we have players who can make these passes and finish things off, so we’ll keep working on it, and I know it’ll come.

“We’ve dropped a couple of places, but we have to deal with that and, with the squad we have, I have no fears about us challenging for the promotion places.

“There’s no need to panic because there’s a lot of football to be played. We’ve seen so many positives from this group and we’re all excited about what’s ahead.

“What we must do is prove that we’re serious about promotion and the only way you can do that is by winning games.

“We have to win games, and I’ll never hide from that. Usually when you come here, when they’re in this form, drawing the game would be seen as a good point, but I can’t help feeling that we should have had all three. That’s why I leave feeling disappointed.”