With some very important games coming up the focus for manager Steven Pressley and his staff is quite rightly on picking up the points needed to keep the Blues in the hunt as they look for a successful conclusion to the season. 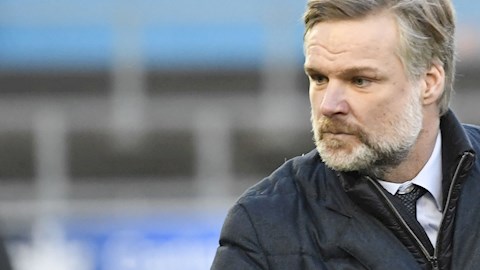 MANAGER: It'll be a tough test because they've recruited well

But, having joined the club on a short-term contract in January, and having made a positive impact through his first month with the club, it’s little surprise that his regular press conferences can often turn towards the subject of his own future, and what he wants once the business of the season is done.

With club chairman Andrew Jenkins commenting on the manager’s contract situation in his recent Exeter City match programme notes, saying ‘I can’t see any reason at present why it will not be extended’ we wondered if any talks had taken place now that the squad is settled and the January transfer window is out of the way.

“I’m very much aware that football changes on a weekly basis and his [the chairman’s] next notes might be telling you that I’ve lost my job,” he joked. “Look, I’ve said before that one of the attractions of coming here was the stability that comes with working for this club.

“They give managers the chance to put their stamp on things, but I’m not even thinking about that. I’m only thinking about one thing, and that’s to try to gain promotion.”

But when asked if he was enjoying his time at Brunton Park, he replied: “I really love it here. I’ve had a really good feeling about the club from day one.

“It’s interesting that my family have all said the same whenever they’ve come up here. It’s true because there are good people here, there’s really good support and it’s a club with a massive potential.

“We have the nucleus of a good team that, with the right additions, could be a very good team. There’s a lot in place here that’s right.”

“There’s a director of football in place [David Holdsworth] that I actually like, because he takes a lot off my desk that I don’t want to deal with,” he continued. “That’s a really good thing because it allows me to focus on what I love, which is managing the players and the team, and making the decisions on that.

“I’m really comfortable at this moment in time. We’ll see over the next couple of months but hopefully, if all goes well, I’d love to extend my stay here. As I say, we’ll see, because I think this is a club I can get my teeth into.”

And having spent time away from the game recently, he said: “I love football and I miss it while I’m out. It’s like a drug to me, so I really miss the pressure and the involvement, and I can’t go without it at times.

“That’s why I love everything that goes with it when I get back into it. It’s a challenge both as a player and a manager, and the great thing about it is that it asks you a lot of questions about your character. You find out many things, but I really like it with Carlisle and I feel like I’ve got good support here, which is a big, big thing.”