United boss Steven Pressley gave us his reaction to the Tuesday night away defeat at Crewe shortly after full time at Gresty Road. 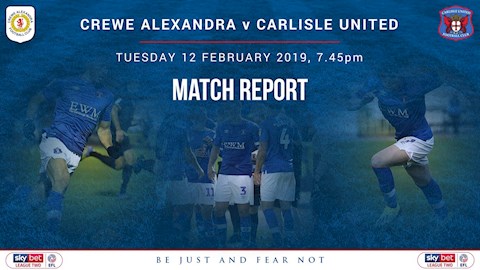 MATCH REPORT: Summary from the weekend away game

“I’m exceptionally proud of the players because I don’t think they could have given any more,” he said. “When you play 80 minutes or so with ten men it’s a real challenge, especially when you’re a goal down at the time.

“We showed incredible passion and resilience, and so much energy and desire. You could see from the response from our supporters at the end of the game that they really did appreciate that type of performance from the team.

“They know how much the players gave, they couldn’t have given any more. When you go and watch your team all you want to see is effort and commitment, and you could tell the fans appreciated that.

“Once you show that I think the supporters will always get right behind you, and they got that in abundance. When you put that much effort into a game, and you’ve got nothing to show for it at the end, it’s disappointing.

“We had a big chance with H [Hallam Hope] in the last five minutes which would have given us a much-deserved draw. It wasn’t to be, and I’m really disappointed for the players and the travelling support tonight, because we couldn’t have given any more. We kept going, we tried to catch them on the counter and at times we looked very dangerous.”

On the quick substitution after the Jamie Devitt red card which brought Gary Liddle into the fray, at the expense of Nathan Thomas, he told us: “I changed the shape of the team after because I honestly believe that when you go down to ten men teams penetrate down the outside, and you can’t always get pressure on the ball in key areas.

“We tried to fill those gaps and it worked for long periods of the game, we looked very assured in everything we did. I didn’t see the incident with the sending off, the fourth official must have seen something, but without seeing it I don’t want to comment.

“There was a lot of passion in the game and it spilled over a little bit into the tunnel and corridor as we came off the pitch, but that’s football. When you’re a team who wants to win you’re always going to get incidents like that. It was an emotional game and things like that do happen in football when you care as much as I think our players do.”

The opening exchanges of the game also brought the disappointment of conceding an early goal when Chris Porter arrived in the nick of time to drill his volley into the bottom corner.

“I actually thought we started the first few minutes of the game well, but we gave up three or four chances on the right-hand side and they scored from one of them,” he commented. “We then began to build into the game again. We responded well to going a goal and a man down, and it was a great finish from Gary Miller.

“It was a great goal and when you play with wing-backs they have to contribute in an attacking sense, which both Gary and Danny [Grainger] did. We were always in the game and they were holding on at the death because we threw caution to the wind a little bit with Adam [Collin] staying up there.

“It was a game where there were a lot of situations where circumstances contrived against us,” he said. “Their winning goal was one of them, it came after a deflected pass, but the pleasing thing as to see our never-say-die attitude.

“Tom Parkes epitomised that. He’s a player who has hugely impressed me since I arrived, and he’s made a big impression on me. I think he’s a player with more to come, he’s getting better and better, and he’s beginning to really believe in himself.

“Gaz Liddle came in and did well, and he’s one of those players you can rely on week in, week out. Even if you look at the final stages of the game, Slater had covered so much ground for us but his desire to get back and stop the third goal was incredible.

“It was another example of what our performance was about. It was one of such energy and such effort, and as a manager you can’t ask any more than that. I was very proud of the whole team’s performance.”

And explaining the decision to move Devitt to the left flank with Hope taking a more central striking role, he said: “When we analysed Crewe before the game, one of their major problems was runs down the outside of their centre backs, which Devitt doesn’t give you as a false nine.

“He wants to drop in and play, but H gives you that movement, and that was the reason we started with Dev on the left. If you speak to some people who have worked with Dev in the past, they actually think that position is one of his best positions, because he can drift from there into a 10 position and it gives him a lot of flexibility.

“Out of possession we ask him to work in a certain way, but in possession he’s got the flexibility to find those areas that he can make the difference from.”