United head to Colchester at the weekend looking to get back to winning ways following the setback of the last two results against Crewe and MK Dons. 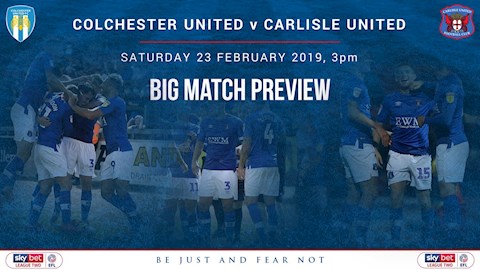 BIG MATCH PREVIEW: A closer look at this weekend's opponents

Manager Steven Pressley spoke about the importance of the fixture at his weekly press conference.

“Of course, it’s an important game, because we want to get back to winning ways,” he told us. “We want to get our season back on track and that’s what our focus has to be on this weekend.

“It won’t be easy, because Colchester are a side who play some good football. I watched them at Northampton and they won the game there convincingly with a really good performance.

“They’re a team that has good energy and a number of match winners who we will have to ensure don’t get to influence the game in the manner they’ll want to.”

“They’re a club that’s recruited well and it’s another good test for us,” he continued. “As I’ve said before, when you’re in the position we’re in you get the pressure of expectation, but it’s a good pressure we should all be able to enjoy, in my opinion.

“In terms of preparation, we worked towards the way we want to play again on Thursday morning. We’ve been consistent in our message on that, but we also have to be aware of certain aspects of how Colchester play.

“The most important thing for me is that we impose our game on them. That can only be done if there’s a game plan that suits our players and that’s what we’re working towards at this moment in time.

“One of the key parts of it is for us to get back to keeping clean sheets, as we did against Port Vale and Colchester. Stopping the opposition from scoring helps you to win games, so we’re looking to regain the habit of doing that.”

Having been through those two recent narrow defeats, he commented: “As I’ve said already, what we want more than anything is to get our season back on track.

“I think the opening 45 minutes against MK Dons was our best since I came to this club, and I’ve told the players it’s about turning that 45 minutes into 90 minutes of good football.

“If we can eradicate the mistakes and continue to play with energy and tempo we’ll be winning games, I can assure you of that.”

Good news came this week with defenders Danny Grainger and Tom Parkes making a return to full training in time to become a consideration for this Saturday’s game.

“Both Danny and Tom participated in training today [Thursday],” he said. “Hopefully we’ll get no adverse reaction and, if that’s the case, they should both be in a position to travel to Colchester.

“I know we thought Tom would be unlikely, but I’ve worked with players in the past who have been given an indication from a scan as to the length of time they should be out, and they work strictly to that.

“That isn’t Tom. He’s been the polar opposite. He wanted to get fit so he could be out on the pitch, and I think his scan might have suggested he’d be several more weeks but, in his own mind, he was just desperate to come back.

“He’s been in all week and he’s had a lot of treatment from Dolly, as has Danny, and he’s shown a brilliant mentality. That’s exactly what I want to see at this club.”

“The Tuesday reserve game against Oldham gave other members of the first team squad the chance to get some football under their belt, so it’s been a good week for us,” he added. “Jason Kennedy and Mark Cullen both had tough Monday sessions, and they then played in the reserve game, so we’re looking after them and nursing them on.

“We don’t want any setbacks with either of them but we’re confident that they’re making good progress. I don’t think Mark is in a position where he can play 90 minutes yet, but he’s certainly in a situation where he can contribute. He’ll be a consideration at the weekend, there’s no doubt about that.”

The next two Saturday’s bring mammoth trips for the fans – something that hasn’t been missed by the United gaffer.

“Getting to these games is a massive undertaking,” he agreed. “It’s hugely appreciated and it’s something that really encourages me. That’s why we have a responsibility as staff and players to ensure that they aren’t let down when they travel that distance.

“There’ll be occasions when there are mistakes, and things like that, but they can never be let down because of a lack of effort from the team.”

On the situation with trial players at the club this week, he said: “We’ve had three in with us. Kingsley Eshun played at Oldham, as we announced, and the other two have been involved in training.

“It’s still early days, we need to see more of all of them, and some of them aren’t here with a view to this season. It’s just us being able to take a look at them as we start to think about the future.

“There’ll be no imminent decision on any of them, but we’ll monitor them and they may come back next week to spend some time with us again. One of them is actually still with a club, but we’ve been given permission to have a look at him.

“For it to go further with anybody at this stage I have to feel that a contribution could be made by them between now and the end of the season, because I am actually very pleased with the squad.”