United boss Steven Pressley spoke to us about tomorrow’s game against Exeter City at his weekly press conference. 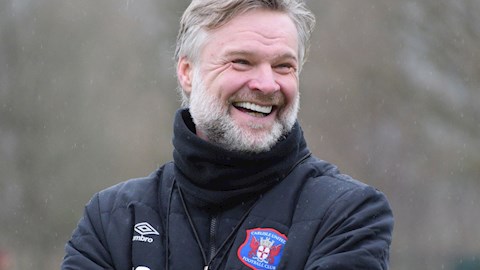 MANAGER: The intensity level has gone up a notch or two

“We’ve watched a lot of their footage over the last few days and, to be honest, I think this is going to be a really good challenge because they’re a very good side,” he said.

“They played really well at the weekend against MK Dons and they have some very exciting players.

“They’re in a rich vein of form and they’ll be coming up here to upset us. It will be a real test for us but it’s one I hope we can overcome.

“They have a lot of creation in their team with Lee Martin on one side, who is very dangerous, and Nicky Law is a fantastic player who can unlock defences and score goals. He’s always very prominent in every aspect of their attacking play.

“Stockley has moved on but they spent money in bringing in Ryan Bowman from Motherwell. I saw Bowman quite a lot while he was in Scotland and he had a really fruitful period with them. He’s a handful, there’s no doubt about that. He didn’t play at the weekend, they played with Forte who is also a very good and experienced striker.”

“They’re actually the kind of team that has a real goal threat in every area and they’ll look to get at us at every opportunity,” he continued. “On the evidence of what I’ve seen of them they play with really high energy and they press teams very high.

“They’re well organised and I think that makes them one of the best sides in this league, so I expect them to come here and push us hard. This is the kind of game we should be looking forward to and, if we do things properly, we can certainly lay down a couple of markers.”

“If we aren’t on our game they’ll beat us, and we have to be aware of that,” he warned. “What we must never lose sight of is that we’re also a very good side when we’re on our game.

“We must concentrate on the day, and we’ll do our homework and give them the respect they deserve, but we also want to impose our way of doing thing on the game as well.

“If we play to our strengths and do the basics properly then I have no doubt that we’ll win it. If we do the opposite and fall under the standards we’ve set then we’re in for a difficult afternoon.

“Exeter have had a sticky patch but they’ve come through that and they’re picking up some very good results. Like I say, these are the games we want to play in so we should go out there to enjoy it. If we can get the right result it really sets us up nicely.”