Midfielder Callum O’Hare has been tagged as hot property following his emergence from the youth ranks with the Villains which has seen him claim a regular place on the first team bench with the Championship club. 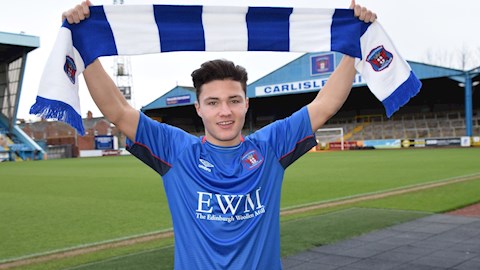 Heading north to Carlisle for the first loan move of his career, we spoke to him shortly after he’d battled his way through the wintry weather to put pen to paper on his deal.

“It was a bit of a whirlwind over the last few days but it’s good to be here,” he said. “I got the call from the gaffer saying he wanted me to come and ever since then I’ve just been buzzing about it.

“The aim the club has is to get promotion and that’s great. They’re in a good position in the league and the manager rang him and what he said to me over the phone made sense to me. The things he talked about are what I want to do so it all sounded really good to me.”

“I didn’t know much about the club until I got the call but I’ve had a good look into it over the last few days,” he told us. “The squad looks good, the stadium is nice and the team plays good football.

“That’s all that really matters to me. It’s my first loan spell but I don’t really get nervous about things, it’s more about being excited. I just want to get out there and show the fans what I can do.

“I’ve had a good taste of football with Villa but I want to be playing game to game and showing everybody what I can do. I want to prove myself and that’s why I think this is a good move for me.”

MANAGER: I feel this is another excellent bit of business for us

Having been tracked by a number of clubs over the last 12 months, he said: “That’s nice to hear but you’ve also got to keep a level head and stay calm about everything.

“That’s even more important when you have been around the first team and on the bench and things at a club like Villa. I’m a fan of the club and I’ve been there since I was seven years old, so it was good to come through the ranks and even better to make my debut.

“Like I say, that’s all good, but now it’s time to get playing as much as I can. The pitch time with them has helped me to get used to what it’s all about, so I can come here now with no nerves and just show everybody what I can do.

“The staff at Villa have said they want me to come here and do well and to keep progressing as much as I can.”

And on joining United with the club currently sat in the play-off places, he said: “It’s really exciting and, with three going up, hopefully we can sneak in there and do it automatically.

“If not it would be just as good to do it through the play-offs.”

But what can the fans expect to see from a player who has a reputation for getting things moving in the opposition half.

“I see myself as a creative player who likes to get on the ball and make things happen,” he explained. “I like to get in the box and either score or assist with goals.

“I’m an attacking player but I like to work hard off the ball as well. I can do a bit of both. If things go well I know I’ll be playing in a team that’s pushing for a successful end to the season, which is superb for me.

“This is the club I want to play for now and hopefully the fans will like me and like what I do. I can’t wait to meet the boys and get out there and start training and playing. We’ve got Crewe at the weekend so hopefully we’ll go and get the three points.

“All of my family will be there to watch so that will be nice as well.”

Click HERE to watch an interview with Callum O'Hare on iFollow United now.