United boss Chris Beech gave us his reaction to the weekend draw with Grimsby Town shortly after full-time on Saturday afternoon. 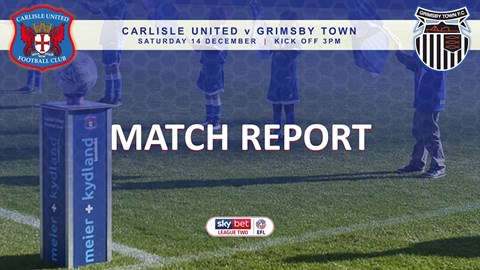 “We didn’t get the three points we wanted but I knew the game would be difficult,” he said. “The conditions were horrific again with the wind but the players stood strong, they looked comfortable and we definitely pushed towards the end of the game to find the winning goal. Unfortunately we didn’t get it.

“We made the changes in the second half to try to make that happen. That’s because you have to try to utilise the squad as much as possible. You’ve got to look at what is actually in front of you in the first half and it’s important you don’t panic in terms of it not going the way you wanted it to.

“The game plan we put in place on Friday was to put the opposition under severe pressure in the first 20 minutes, but we didn’t do that. We threw the ball backwards from throw-ins and we played out from the back from goalkeeper to centre half, and I didn’t want that. That sometimes happens under pressure but what the lads did do, after finding their feet and getting to grips a little bit, was that they used the ball better.

“Don’t get me wrong, Grimsby had their opportunities, but so did we and the game was in obeyance until we stepped things up in the second half. It was unfortunate for Canice [Carroll] that he came off but Christie Elliott had a good impact and we also had substitutes who were trying to get us the winning goal. You could argue the changes helped, but ultimately it didn’t work because we didn’t win. Overall it was a tough game.” 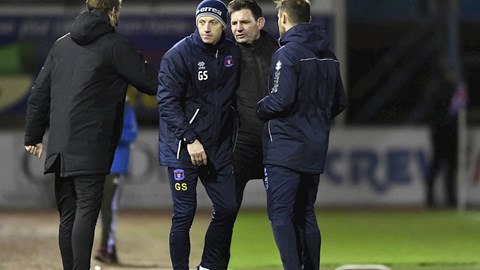 On why it took a while for the game plan to kick in, he told us: “Sometimes it’s hard to answer that question. Sometimes you don’t know why, but passing it forwards help, obviously competing for second balls, and looking to have a better end product.

“When you start doing that, things start happening for you, and eventually we did. Why, I don’t know, because we had our plan, but we just didn’t start with it. I want to win football matches and I want us to show higher standards in how we go about our weekly duties to support us on a Saturday.

“I’m pleased that we’re five unbeaten which is probably the longest run of the season, so we need to step on that. We need to go the extra three yards to make sure we get the credit for hard-fought battles that we’ll have in League Two. If you do that, you get three points and you can build momentum. We’re very close to being like that, but we have to work so much harder to get it.

“We’ve got to work hard on the training ground, on simple little things, on receiving and releasing skills, they’ve got to be better, faster. You can’t reinvent football. But you can have a high standard on what you’re trying to achieve within it.

“It’s difficult at the minute with conditions, the training ground’s sometimes not available, and we’ve got games all the time. I’ve had two real hard physical, technical sessions that the lads have responded well to. I need, and the staff need, to raise standards and keep working hard for the players, because it’s the players who are under the pressure to perform.”

With the team earning a third clean sheet from the last five games, he commented: “It’s obviously always good to get a clean sheet. We had a forced change with Byron Webster not available and I’m really pleased with how the lads defended. Byron had to follow the FA concussion protocol so he can train on Monday, without any heading involved, and then get back to full training on Tuesday.

“Grimsby did get in on the odd occasion and the skipper made a couple of clean handling saves from headers, but other than that I think it was shots from distance. With a little bit more risk in the final third, a bit more quality and some added momentum, don’t give fouls away, don’t do silly things, don’t hand the ball away when you don’t need to, don’t be offside when you don’t have to be, because it all builds pressure.

“With the selection, Canice [Carroll] was at right back and that’s something he’s done before. But the game changed, because their main physical threat came off with a calf injury. Aaron Hayden is a physical athlete and I felt he would be best placed to go against Hanson.

“I didn’t want to make too many changes within the game as we went for the win, but I wanted us to be pushing on. I had a little bit of a negative with Jon Mellish pulling out of training on Friday, but we have to utilise those players we do have and go with the game.

“Christie [Elliott] came on and had a good second half. We’ve had a good defence with people who want to defend. I’ve looked at the goals Carlisle have conceded over the season, and the lads have responded defensively to what we’ve asked of them.

“We’ve got to get the ball down in midfield and pass and move it forwards, then I want my attacking players to come to life. It grew as the game went on, but it needs to finish with a goal rather than a ricochet or a block.”

“Obviously Aaron [Hayden] has taken his chance and he’s played a part in us looking more solid,” he continued. “He won man-of-the-match but I don’t think that was one of his strongest games.

“I asked him was that your old man in the crowd picking that one? He’s been very good. He’s a threat at both set-plays for, and generally also making first contact on set plays against. That helps and it helps the skipper keep a clean sheet.

“Defensively we have a base but you never take anything for granted. We have scored some very good goals in this period, the attacking players are performing, it’s just getting the mixture of both.

“If anything we need to keep the football more, I keep talking about it and we’ll keep working on it, it will help reinvigorate the forward movement wave and second wave of attacks, that’s what really we’re concentrating on.”

And with youth second year Charlie Birch making it to the bench, he told us: “It’s good to see a young player on there. I’ve told the lads in the changing room, I want the youth team players to take the shirts off the first team players.

“I want that competitive edge amongst us all, but while we respect each other. I definitely want that to keep happening.”