United head to the Bescot Stadium on Sunday looking to build on the defensive solidity which has seen them keep clean sheets in four of their last seven games. 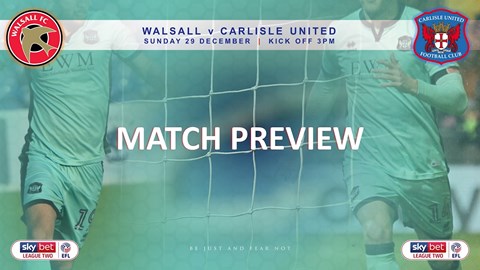 Speaking about the game, head coach Chris Beech said: “Walsall will give us a very strong challenge. They are a workmanlike team with great energy in it and they all always give 100 per cent.

“We’ve got a challenge on our hands, there’s no question about that. And I know… I’m really good friends with Marcus Stewart, he kept in touch when I wasn’t in work, I played with him at Huddersfield and of course their manager has been excellent in non-league and at Bristol Rovers.

“He turned down massive jobs while he was at Bristol Rovers, and ended up losing his job. He knows the league, knows the players, so we have to be right on point to get a positive result at Walsall.”

“It’s a quick turnaround and the players deserved, because of their physical efforts on Thursday, a day off. They trained after the Bradford game, those who didn’t play a full 90 minutes, and the boys who put a full tilt physical performance in did some recovery in the gym. We don’t take shortcuts, we prepare as normal, but we have to find the most effective way of doing it.”

And with Jacob Blain, the club’s new analyst in the building, the boss commented: “Having somebody in this role is a great contributor to helping me in terms of having someone who can analyse our opponents.

“David Holdsworth the director of football supported that. It’s a big acquisition for a football club, you’ve got a wage demand, but I’ve been supported with it. He can look into not only our future opponents but also players I want to get real close and tight to recruiting.

“He’s given up a top youth job with three-course dinners, he’s taken a wage drop to work in first-team football with his home-town team, and you can’t ask for any more than that. I know him for the fact he’s intelligent, has a good eye for analysing football data, and he’s worked hard over Christmas Day and Christmas Eve.

“If he’s doing things like that, prepared to commit to his opportunity, I think it speaks a thousand words. We have plans to move the club forward but we’ve got to do it in little steps, and this is one of those little steps.”