United boss Chris Beech gave us his reaction to the Boxing Day draw with Bradford City shortly after full-time on Thursday afternoon. 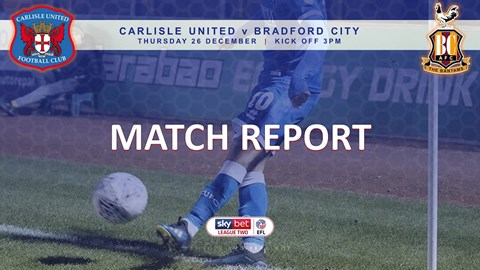 Speaking first about a third clean sheet from the last four games, he told us: “I obviously want to win games. This football club hasn’t won matches for 12 months really, regularly and consistently.

“It’s my third home game and we’ve not conceded a goal here, so I’m really pleased with that. It’s something that hasn’t been happening regularly, as well as not winning matches.

“I’m pleased with the resolute, consistent behaviours of the lads, I’m happy they’re winning the ball back further up the pitch and creating chances.

“The team spirit was excellent. Hats off to that, because it’s been building for four or five games. It was excellent to see us respond to the disappointment of the last 25 minutes at Colchester.

“I’m pleased for the goalkeeper, the back four, the whole team – a clean sheet is something a team gets, not just a goalkeeper. But we got a bit loose on a couple of occasions towards the end.

“Even young Jarrad Branthwaite, who we forgive with his age, there was a free header at the back post, and it was his man. An opportunity then comes at that point because of it. A couple of times when Adam Collin could have caught one of them. But he learned from his mistake and claimed a great high ball.

“We have to cut that out altogether. I’m really pleased with the lads’ efforts; they need credit for that. We’ve took a league juggernaut to the twelfth round, and it looked like we were going to win that fight.”

“Like any tight game, if you look at the difference of squads, Bradford bring on Vaughan to get the winning goal and that is a great attribute to have in your squad,” he continued. “We’re not in that position. I’ve got to try and find a different way and utilise the squad to the best of its abilities.

“I was really pleased with how they reacted, especially in a big game at home on Boxing Day, because the pressure was most certainly on us. I felt, looking at all the chances and opportunities, we should have scored the winning goal.

“The good thing is that I feel the supporters could connect to that performance and I’m pleased with the way we created opportunities. Of course it would be good if we took one of them, but that will come.

“You could see our players pushing themselves at the end and we had players cramping and looking a little bit tired. But that’s because they responded to what happened last weekend, and they should be pleased with that.”

Looking for the ingredient to turn the tight games into victories, he commented: “From this game, Bradford are a League One squad with some excellent players, but we had them a little bit ruffled.

“I’ve been in charge for six games now and we’ve been leading in three of them, but we’ve got to make sure we can get that ball in the back of the net. Hallam Hope is a smooth operator, a very good football player, Nathan Thomas dribbles, checks, turns.

“I asked him to run and run hard for us, and he did, he gave everything. So did everybody else, and we need some more support from midfield runners to run off the ball, through lines, and get in the box.

“Scougall’s excellent at recovering and taking the ball off their number 4, who tries to dominate the match. We spoke at half-time to get him to try and do as well as he was doing doing that, and also do the other side.

“That was the same for Mo Sagaf as well. He’s not started for a while, he’s got closer to the first team, but he too should be breaking those lines and taking shots. I joke with Kelvin Etuhu, I want everybody part of what we’re trying to achieve to have little snippets and words, with the experiences he’s got, even though he can’t help us on the pitch. He promised me Mo would have three shots a half; I didn’t see one!”

Speaking more about turning those chances into goals, he said: “We do shooting practice, we have players like McKirdy who had the shot when he went through, perhaps he could have stayed on the ball a bit later and picked his shot better.

“He does it all the time in training. It will come, one will just go in. It’s strange how those things happen when you’re not getting what you’d class as the rub of the green. But I don’t believe in luck, I believe in habits, it falls into how you play.

“The more we get nearer to the hot spot of doing that right and regular as a group of people individually, we’re only ever getting stronger. We’ve had a strong month, really, we’ve been beaten once, but it’s a third clean sheet at home. Things are moving, I’m impatient but we’ve just got to just keep plodding on, or pushing them boundaries.”

As the January transfer window approaches a rumour surfaced throughout the morning which suggested that Everton had secured a deal for the services of teenage defender Jarrad Branthwaite, with a loan-back option as part of the transfer negotiation.

“We need to score goals so I’ve swapped him for Richarlison,” he joked. “I know nothing about that, absolutely nothing. I have just been totally concentrated on trying to beat Bradford City, who are looking to try and get automatic promotion.

“I’ve been doing work towards finding new talent, I will say that. I’m 99 per cent down a road with signing a new player. At the tick of the clock on the 1st of January you might find out who that might be.

“I’m also sending out our staff, I’ve got to thank people that go outside their duty to support us moving forwards. Mark Birch has been to watch a couple of games for me, he went last Saturday and it got called off at 2.50pm, and it was four hours from Carlisle. We’re doing as much as we possibly can to make sure we’re in a stronger position come the 1st of February.”