United boss Chris Beech spoke more about the weekend draw with Grimsby Town and about a busy period coming up. 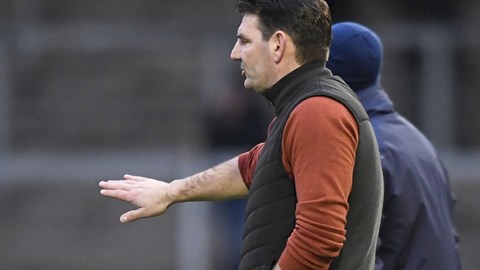 MANAGER: Defensively we have a base

“We won on Tuesday and we’ve drawn on Saturday, and I suppose if they’re both league games it’s a good couple of results,” he said. “We’ve got a lot of games coming up, they’ll be coming thick and fast over the Christmas period and it will be difficult.

“The players have only had two really hard, physical sessions with me because you can’t train like you can in pre-season with the fact you’ve got games every few days. I’ve had to hold back at times, but one thing we can have is high standards.

“The players are giving everything to try and improve, but if two or three join the lads who are giving it everything every week, it will soon turn into three points. I’m enjoying the challenge of getting us there, I really am.

“I do feel really humble when I meet a Carlisle fan. What I tell them is that I’ll treat every day like it’s my first day, take nothing for granted and I’ll one hundred percent give everything to this job.”

Speaking more on the work still to do going forward, he told us: “There are things for us to work on. I said to Nathan Thomas on Tuesday, I thought that was the best performance he’s had for me. He was very disciplined and professional.

“He doesn’t need me to tell him he can be a matchwinner on any day, but we’ve got to find consistent performances, not just from Nathan because I was quite excited picking that team to think Scougall and Jonah would back up a Hope, McKirdy and Thomas type attack.

“In turn I felt that would be supportive of Lofty, who was trying to be physical against two League Two centre-halves. It didn’t quite work out like that. The plan’s a good one on paper but it needs adapting, and it often needs adapting due to what the opposition are doing, the conditions, and the simple fact of the form of the actual players.”

The draw made it five games unbeaten for the Blues as they look to build momentum heading into the second half of the campaign.

“It’s good that we got another clean sheet but obviously like everybody associated with Carlisle United we want three points,” he commented. “I’m pleased with how we grew into the match and with how we finished it, but it goes without saying we want that next step.

“To get that everybody needs to make sacrifices to make sure they perform at their optimum levels – it’s got to be worth something, because it makes you feel better for making them.

“Whether it’s living away from your family, going the extra mile in terms of preparing for what you want to achieve within that week, it’s vital it’s represented by three points, because it helps growth and helps us in terms of league results.”


United’s threat from attacking set pieces has become a feature of their game over recent weeks, with Aaron Hayden the latest beneficiary as he bagged his third goal for the club from an Elliot Watt...

INTERVIEW: Pleased with how the lads are supporting each other


United boss Chris Beech spoke more about the weekend draw Morecambe as he reflected on what was another committed performance from his team.


United’s threat from attacking set pieces has become a feature of their game over recent weeks, with Aaron Hayden the latest beneficiary as he bagged his third goal for the club from an Elliot Watt...


A young United side bowed out of the Cumberland Cup at the quarter-final stage on Tuesday night as Penrith showed a ruthless finishing streak with goals at key stages of the game.


United met the Blues at Frenchfield Park in their rearranged fixture on Tuesday night as both sides looked to continue their progression in this season's Cumberland Cup competition.

INTERVIEW: Pleased with how the lads are supporting each other


United boss Chris Beech spoke more about the weekend draw Morecambe as he reflected on what was another committed performance from his team.