Head coach Chris Beech takes charge of his first United league game at the Globe Arena on Saturday with over 1,500 United fans expected to make the relatively long journey. 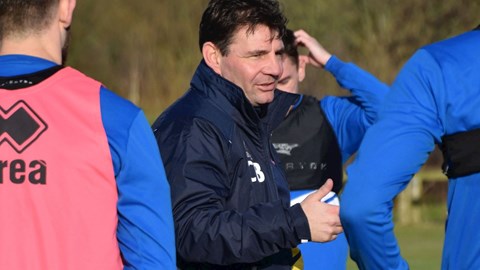 INTERVIEW: I don’t see this so much as a challenge, it’s more of an opportunity

We spoke to him about the fixture at his pre-match press conference.

“It’s an important game for both teams,” he said. “We’ve played 19 games now but that means we’ve got a long part of the season left. It’s not all based on one fixture this coming weekend, but I’m feeling very energised and we’ve certainly been getting the players ready because I know how important this game is to the fans.

“They’ve also got a new manager and I have a lot of respect for Derek [Adams]. I’ve met him often when he was at Plymouth, he got them promoted, and it’s great to see him back in football.

“Morecambe are a very good club, I lived out that way as a Fleetwood lad and I often used to stare out of my room at Morecambe Bay. It’s a club that’s been run very well by good people and Derek brings good experience into that role.

“They have some excellent players and I actually coached four or five of them at Rochdale. We had John O’Sullivan as a loan player, we signed Lewis Alessandra and Andrew Tutte, and Alex Kenyon was a schoolboy who came through a very strong system.

“They’re all great lads and they’ll want to win as much as we do. With players like that I’d expect them to be higher than they are, so we won’t take anything for granted.” 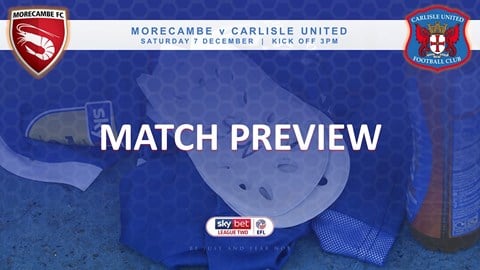 MATCH PREVIEW: Back to Morecambe at the weekend

With the trip to the Globe Arena one that can be classed as a local derby, we wondered if that brought an added edge or its own feeling of pressure.

“I don’t think there’s any pressure on us,” he said. “This is what we’re paid to do. Players enjoy playing football, and I think if we get our environment correct and attack challenges rather than fear them, we’ll do well.

“Pressure is just a word, there are people out there who have to do 12-hour days to provide for their families, so I don’t know how you can feel pressure by playing football. I want to make sure our players understand that they’re in a privileged position and we represent those people who will be there watching us.”

And with the Blue Army travelling in huge numbers, he told us: “I’ve heard we’ve had over half the attendance at this fixture before and that will be fantastic to walk out to.

“I want to try to provide the fans with something they can really relate to, not just this weekend but going forward as well. The Forest Green game was special in front of 228 fans, so meeting them last weekend was great and it will be good to see so many of them on Saturday.

“If we play football that gets them excited that will mean they’re waking up each match day looking forward to coming to watch their team. It’s when that happens that they start to attach themselves to the players and they start to really enjoy their day.

“Like I say, I want them to feel rejuvenated and energised on match days. It will be hard work and we’ll hit speedbumps along the way but, when we hit those speedbumps, I want people to stick with us.”

In terms of player availability, he commented: “Without going too much into it, we’ve had a couple of knocks, but we’ll see how that goes before the game.

“We were without Jarrad [Branthwaite] last weekend but the lad’s a Rolls Royce, isn’t he, and sometimes they break down. I’m pleased to say he’s fixed now and he’ll be itching to get back at it.

“I thought the two centre backs were excellent last weekend so that’s something I’ll need to look at. Aaron [Hayden] got a start and he’s a strong lad who has good things to offer. Hopefully it’s the start of a good Carlisle career for him because he has a physical presence, so he likes to defend, but he also wants to play football.

“The pleasing thing is that we’re seeing these players step up. I mentioned the heart and desire that Canice Carroll showed on Saturday, and he’s a great lad because he will always give a hundred percent.

“He often gets it slightly wrong and kicks somebody or gets booked, and that’s something he needs to refine a little bit. I also want him to improve what he does in possession, but his work rate was a big factor in why we did well at Forest Green.

“From what I’ve seen everybody wants to be involved and they all want to play their part. That bodes well for us, because we need that attitude within the dressing room to help us to start to push back to where we want to be.”