United boss Chris Beech gave us his reaction to the away defeat at Colchester shortly after full time on Saturday afternoon. 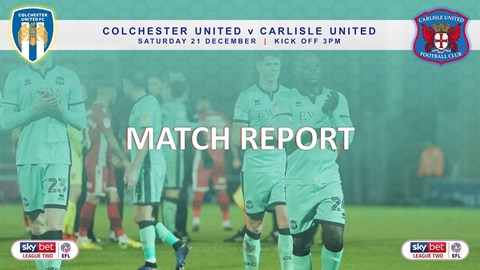 “To be honest, I felt quite comfortable until they scored,” he said. “I thought we were frustrating them and picking them off at times. We had as many opportunities as they did in the first half but we didn’t capitalise when we had our chances in that last third.

“The first goal, you can’t hide from the fact it’s an own goal and a disaster, really. Their player wasn’t under any sort of pressure, it was a bit too easy to get the cross in, and Knight-Percival decided to try and deal with it with his right foot and he’s poked it into his own goal.

“The second one was again a strange goal. They got the pot shot in, Adam saves it, Christie Elliott’s slightly on his back foot, the ball bounces between him, Byron tries to get across and block it and a bit of a scuffed shot goes in the bottom corner.”

“I’ve just told the players, it’s pointless not talking about the elephant in the room [in terms of goals conceded],” he continued. “We’ve got to be more honest about ourselves and respect each other. That comes from hard work.

“From there it represents Carlisle people, they want to see honesty and hard work. The boys stuck to task to an extent within that, but at the tipping point in any fight you’ve got to have a physical response, not a mental one – you need positive body language. Today we didn’t get that at the point of being able to turn that game back around.”

With Colchester adding a third after the break, it became a difficult task for the away side as they suddenly had a three-goal deficit to chase.

“It’s scorelines, isn’t it,” he commented. “I told them at half-time, even though it’s 2-0, it’s not really been Colchester’s game. We’ve been as good as them but we didn’t capitalise on good situations.

“There were Christie’s shots, Hope had a couple, Lofty somehow didn’t connect when Christie fired it across, the set-plays weren’t good enough and our distribution from the back wasn’t good enough.

“These things all come together to make it more difficult than it needs to be. We were close with each, but the scoreline suggests we’re not.

“At two goals down, the next goal is so important. It’s a world class free-kick, and that really takes the game away from you. What I’m really disappointed is I asked for character at half-time to make sure we stayed in the game. They had a go, but after the third goal it looked a bit too comfortable for Colchester and I can’t accept that.

“The lads have been in this position many times before I walked through the door. I don’t want it to creep back in – in fact, I won’t allow it to. I want higher standards in how we go about training. Whatever we’re doing, I want it to mean something.

“It’s important we have a standard to what we’re trying to achieve. If we set the bar high on a daily basis those are habits we take into our games. I’ve been challenging that and I think I’ve seen a difference in that.

“Players have responded to it quite well, but I’m not going to accept and the club can’t accept certain results. Defeats will happen and you have to hold your hands up when you’ve been well-beaten, but if it’s a lack of honesty and respect to each other in terms of trying to achieve, we’ve got to address that.”

With players absent through injury and illness, he told us: “We had 16 professionals and two scholars to support us. Jarrad Branthwaite and Harry McKirdy are ill, Jon Mellish is nearly fit.

“It’s tight for us, the games are going to come thick and fast. That’s not my responsibility in terms of having the squad numbers I have and I have to deal with that and make sure that we make that better.

“My job is to enhance the standard it was at and try and make it better and improve it. We’ve done that, but today didn’t represent it, especially in the last 20 minutes. It’s an obvious statement for us to make that key players were missing, but I’m not accepting that as an excuse and the players know that.

“It’s meant we haven’t been able to get a settled team but that’s part of having a squad. Of course we would like the squad to be a bit bigger, a bit more depth, but that’s why I’ve challenged the youth system to support the first team.

“I’m hopeful that a few more lads will be available for Boxing Day. It was good to get Charlie Birch on the pitch, he did well, he pressed and he was prepared to run. They’re just simple things.

“I’ve been really pleased with how the players have gone about what they’ve done. It’s not time for me to look at destroying it because they’ve just gone five games unbeaten. It’s important I take that in, take that jab, but it’s also vital we address why it’s happened.”

And coming on-board to help with the preparation of the players and the squad will a be a full-time analyst who will joined the staff for the first time on Sunday morning.

“It’s an addition which I think will help us to improve the work we’re doing,” he explained. “David and the board have been very supportive and it’s an area which will help us to analyse individuals, teams and games.

“It can only improve us. I want to analyse good things as well as challenging things. I want the staff to challenge themselves. I think we need to raise our standards, it’s simple, I will stay there, they can come and meet me.

“If I start coming backwards this club won’t improve, and I want to improve this football club. Everybody does. You’re going to get people that really support the lads, people on the edge and people that don’t … but I want to make sure we’re clean in our work and that we improve our standards.”