Head coach Chris Beech gave us his reaction to his first game in charge following the 2-2 Emirates FA Cup draw with Forest Green. 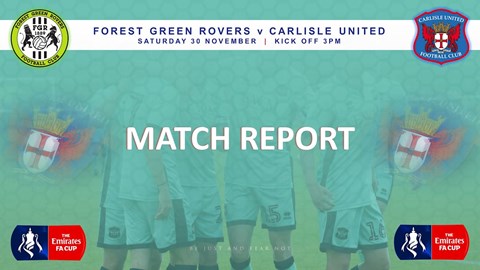 MATCH REPORT: Report from the FA Cup second round game

“I’ve got to be mindful that we were playing against Forest Green, who are one of the most possession-based teams in the league,” he said. “They’ve been doing it for a good two years now and getting better at it, with better players doing it.

“I was pleased that the lads stuck at it, especially in the first 25 minutes, because your resolve to keep pressing, keep digging in - in that fight you can start giving up, but they didn’t. They stuck at the task and then started wearing Forest Green down. Opportunities started arising for us and the two goals we scored were really, really good.”

With the lads having recovered from the setback of having gone a goal behind, he told us: “They showed great character. I think the players represented the 200 plus fans that came to watch today. Carlisle people coming to watch us play is fantastic, coming all this way, coming to see the team representing the values of the Carlisle people, that’s really good.

“That resolve to come back and get in front … it’s just disappointing that we didn’t win the game. The draw is obviously something for us to look forward to, but I’d have preferred it if we’d made it through.

“It’s Mark Cooper’s fault, he said he didn’t want a replay and have to come up to Carlisle in his pre-game interview! I’m very pleased because we’ve got an opportunity to play again, but Forest Green are a very good team.

“Added to that I want a little bit of quality and the ability to score the type of goals we saw today. But they should be winning goals.”

Speaking more about the brace from Nathan Thomas, he commented: “He was excellent. He was tracking back and doing things that really good players do. Nathan can do all of that, along with the rest of the squad.

“There are a lot of good players in that squad. If we can find the mentality to winning, having a bit more resolve, quality on the football, have more numbers in the box to score, play higher in the opposition half, if we start doing those things regularly, and with a bit more quality, I think we can get on some sort of winning run.

“I’m going to demand these things because I always want a little bit more. I can’t help that, I think that’s the right way to be as a coach, head coach or manager. I think I was really impressed with the spirit, the quality of our goals and so disappointed with the type of goals we conceded.

“The first one will probably never happen again. I watched the last couple of games and our keeper is a brilliant shot-stopper. He thinks he’s got it, I’ll have to watch it on the DVD, just as he’s taken the ball it bounces off the bar and goes straight to their player.

“Was it his mistake, he’s almost got the ball and it hits the bar the same time, comes out to their player. If we can iron those things out we’re moving forwards.

“The second goal isn’t a foul, Mike Jones wins the ball in midfield, it just isn’t a foul. The free kick comes in and there’s a ricochet, Gethin [Jones] should do a bit better and be cleaner in his work, but it ends up as an own goal. But it wasn’t a foul.

“We scored two goals which I know are the type our fans want to see. It’s football played with the values we’re going to move forward with, but we haven’t won the game, and that will always be frustrating. I’m absolutely gutted we didn’t win that game for the supporters, because we were good enough to win that today.”

With the manager ringing the changes with his starting line-up, he explained: “I went with a 4-1-2-3 because I didn’t want to match them up. I’m asking the players to do new things, it’s going to take a little bit longer than three days to make sure we can take the game away from our opponents so we can feel comfortable in the last 10 minutes. That would be a nice feeling.

“I want to get our standards higher so we can get into winning rhythms. The performance deserved a win, at the same time we showed patience and resilience, but I’ve got to show respect to Forest Green because they’re one of the best possession teams in League Two.

“I’m looking forward to next week to hopefully getting a solid week with most of the squad.” 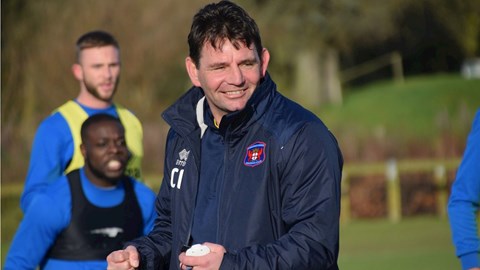 In the illness that kept teenager Jarrad Branthwaite at home, he explained: “He’s had a massive period before I’ve come, he’s getting a lot of media attention and quite right, and it’s very difficult as a young player to receive that and keep going.

“They’re human beings, it’s the first time it’s happened to him in his life and he’s ended up picking a virus up. I think he got it, I was told this week he was ill on Friday of last week but didn’t tell anybody, played against Cambridge and he’s really plummeted in terms of his immune system.

“The doc and dolly have been picking him up and I’ve spoken to him regularly. He was starting to feel better, but it just wasn’t enough time for him.

“Elias Sorensen and Christie Elliott missed out as well. There was no real reason other than if we were at home I probably would have tended to have a third striker on the bench. Down here I knew we were going to be put under pressure, and I’m glad we did the extra defender.

“Jon Mellish came on and he was excellent last Saturday. I spoke to him when we were training at Blackburn and I said to him that it was hard for me to talk to him about missing out, and I’ve been a player myself, but I just felt Aaron would give us physicality.

“I wanted Byron’s experience and brain with it, and it worked well, those two worked well together. Jon was excellent taking the news and excellent when he came on the pitch.”