INTERVIEW: It's little differences that can really make a big difference

We spoke to him about it following the away draw at Morecambe on Saturday afternoon.

“I’m looking forward to seeing our fans, it will be really good,” he said. “I hope the supporters get right behind us. We’ve regrouped after the Saturday game because it’s important that we do the right things to make sure we’re fully energised for what will be a tough game.

“It will be good for me to see the fans but it’s not about me, it’s about the lads and about the supporters, it’s about them. The boys can enjoy it and I suppose the pressure’s on Carlisle with us having brought them up here.

“But we can’t think like that. They’re a team that goes for total possession-based football and they’re very, very good at it. That’s why I expect it to be tough.” 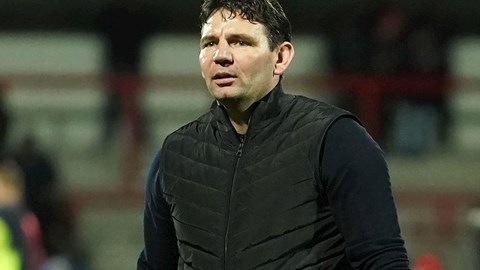 INTERVIEW: Pleased with the spine and structure

“We obviously learned a lot from the first time we played them,” he continued. “With only a short lead time between me joining the club, and taking the team away to that game, I was absolutely delighted with the way the players responded to what was a busy and hectic week.

“Whilst I was pleased with the performance, particularly the goals we scored, I was disappointed we didn’t win it. To score two goals against one of the best teams in our division away from home shows me what our players can achieve.

“On the less pleasing side we need to eradicate the basic errors at the back and myself, Gavin (Skelton) and the rest of the staff are well under way with putting that right.”

“Mark [Cooper] will bring a side high in confidence from their league form, yet disappointed and frustrated that they’re having to make the long journey to Cumbria on a cold Tuesday evening in December,” he told us. “We’ll need to be at our very best in this game. Everyone knows what awaits the winners and that game is in itself an exciting prospect and opportunity for whoever successfully goes through.

“We’ll prepare fully and, whatever happens, be it in the 90 minutes, extra time or penalties, we’ve got to find a way to win.”