Head coach Chris Beech gave us his reaction to Tuesday night’s Emirates FA Cup replay victory over Forest Green which takes the Blues to Cardiff in the New Year for the third-round cup tie. 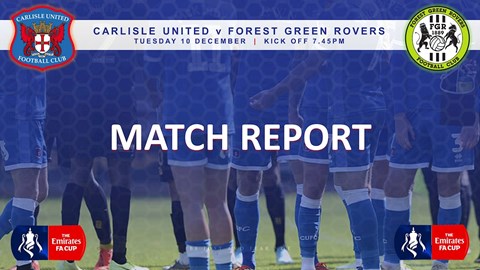 MATCH REPORT: Summary of the round two replay

“The conditions were great, weren’t they!” he said. “I was pleased with the way the lads dealt with that. We played a good game at Forest Green in the first tie, so we knew they’re a possession-based team and you’ve heard me speak often about how high I regard the way they play.

“Ultimately we stuck to task, scored another goal that was disallowed and another that was legal. I’m just really pleased with the fact we’ve got through to play Cardiff because that’s a game we an all look forward to.”

With the team having been ahead in the previous two games, he commented: “I’m absolutely delighted that we saw it through because as soon as we scored, I said to Gav [Skelton], make sure we get over five minutes this time please.

“There was an extra resilience to the players tonight, in the harsh conditions we played in. You could see that in Loft, Canice Carroll, in the players that gave everything on Saturday in terms of Hallam Hope, Michael Jones, Scougall, they were suffering physically but cracked on and gave their best. I had to make changes to get us over the line, but they gave everything.”

Importantly the goal came at a spell in the game when it looked like the home side were on the brink of a breakthrough.

“I’ve been working really hard individually with players, because they’ve been sleepwalking and they need waking up,” he told us. “I’ve spoken to Lofty about the extra five yards. If I played with Nathan Thomas, and he’s on the football, I’m one hundred percent getting in that six-yard box. It’s those extra five yards which will provide him and others with more goals.

“Everyone had put a shift in on Saturday so I knew the boys would carry fatigue but, at the same point, looking at our squad and how we can look to develop it, I just felt like sticking with more or less the lads that started that match.

“Obviously Jon Mellish is injured, he picked up a dead leg, but it was a big ask of them playing against a possession team on our pitch, which is a bigger pitch, but I was really pleased with the efforts and commitments.

“I just want Carlisle people to enjoy coming to this football club. We’re obviously not the biggest budget and not the biggest team, but the history suggests we are. We’ve got to try and find a way to make us better at the moment.

“I know where we are in the league, and we need to win games. And I will reward the players for winning games, because that’s what we all want. The currency of first-team football is winning. I want to play possession-based football, I want to play like Forest Green, but I’ve got to get two to three-year turnovers to get to that point. But while we can’t, we can give one hundred percent and a little bit more to make sure we represent winning.”

And it was a goal from a set-piece – a first senior strike for defender Aaron Hayden.

“What can I say about Aaron?” he said. “He’s physical, quick, committed and he represents hard work. He’s waited for an opportunity and he’s now been given it. And, it has to be said, he’s taken it.

“He took it in the first game at centre-half but I had a few conundrums over the weekend. I picked three teams on Sunday, got two phone calls in the day that made me change to what we ultimately came out with for our plan for Monday’s preparation for tonight. I’m really pleased with how the boys stuck to task and at times showed great quality and team spirit.

“Putting Aaron at right back, he’s played a lot of football in non-league there and I need his physicality in both boxes, and his attitude towards giving it everything. Sometimes players get used to being professionals, it happens in any job.

“But you’ve got to try and treat each day that you’re at work like it’s your first day at work. Aaron does that. He’s so humble and he gives the feeling of almost how fortunate he is to actually be here.

“I know he worked very hard previously to get in the team, and when I wasn’t working I was watching lots of football matches, and I saw him come on against Wolves here, and I just loved the way he went about it. He was up against a good team but his physicality, covering, and speed ... I thought this team lacks that, we need to add to that along with the qualities we already have, and he provides that.”

And on standing in the dugout as head coach for the first time, he told us: “It’s not about me, it’s about the players, it’s about the supporters. I enjoyed my first home game, to get a positive result, and let’s be positive about it, Carlisle United are in round three and we’re going to Cardiff, and that feels really good.

“When the draw came out my son Brandon was texting Mendez [Nathaniel Mendez-Laing], giving him some stick, Mendez said they’ll be ready for us, of course they will. We’ve got to enjoy that.

“It’s excellent finance for the club, really good getting a positive result in the first home game for me personally, but I’m more pleased for the chairman, for David Holdsworth, and the supporters. They were right behind everything we did. I don’t know who it is but there’s a lad in the Paddock, I can feel what he feels, I want that to come out in our players, because Carlisle, when I was a player, was a very harsh, hard place to get a result.