We caught up with youth boss Eric Kinder on Tuesday shortly after full-time of the opening game of the season against Blackpool. 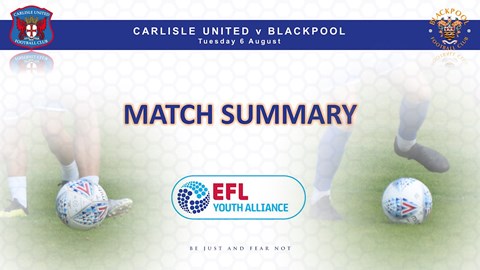 YOUTH: Result from the first game

“We played well for the first 37 minutes, until we conceded the goal," he explained. "It was a really sloppy bit of play and it affected us, and for the remainder of the first half it rocked us back a bit. That’s something we’ll have to work on, making sure we don’t let mistakes affect us.

“Jamie [Armstrong] obviously didn’t mean to do it, and people have got to rally around him. We lost our shape and composure when we'd had control of the game before that, but we got it back in the second half."

“We started to play our game much better just after the break," he continued. "It was a fantastic ball in from Charlie [Barnes] for Kyle [Soper] to head, and that goal got us right back into the game.

"I told them at half time that if we kept playing in the way we had been then we would win the game."

“Straight after the equaliser there was another individual mistake, but one thing I thought they did was learn from how they’d reacted to the first goal," he commented. "The really pleasing thing was that they didn’t let the second one affect them as much.

"They carried on and we ran out comfortable winners in the end. We played some good football and I was pleased with that, because it’s what we’ve been working on for the last six weeks.

"We’ve been working a lot on passing and keeping the ball. We saw bits of it at Middlesbrough last week in the friendly, and we saw more of it today.

"We’ll go to Oldham on Saturday and hopefully see more improvement before we go away to Hungary for two weeks, which will give us more time to work on things."

“There is still a lot of work to do but there are some great signs there," he concluded. "If you compare what they were like in the first three weeks of the season to how they are now, they’re totally different.

"If they keep improving at that rate then not only are they in for a good season as a team, the second years stand a great chance of making the step up.”