United boss Steven Pressley spoke more about the impressive Tuesday night Carabao Cup victory which has earned the club a second-round visit to Spotland to face Rochdale in what will be another tough encounter.

“That will be a tough game because they’ll want to be in the next round just as much as we do,” he said. “It’s another away game but we’ve shown that if our attitude is right then that doesn’t matter. It’s about how we apply ourselves to the game that will decide our outcome.

“We were all really disappointed after the Swindon game, because after we’d played Crawley I think everybody was on a high,” he continued. “We’d shown real flashes in that game and in pre-season of what we’re capable of.

“We had the disappointment at Swindon, but I didn’t feel I needed to make wholesale changes because we know what we want to do and how we want to operate. It will take time, but the Barnsley performance justifies some of the work we’re doing and where we’re trying to get to. 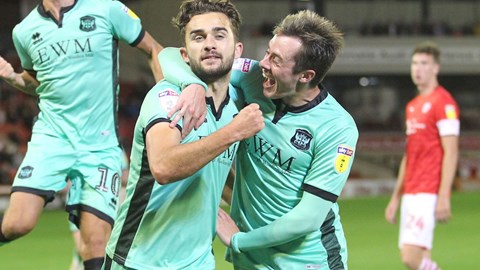 “The performance is a real marker for us and come Saturday we’ve got to be ready again, because we face a strong Mansfield side. They’ll play slightly differently to Barnsley, but we have to adapt and be ready for that.

“The result at Oakwell is a real plus for us because it gives our supporters real excitement that comes with a cup run, but the bread and butter is Saturday’s game and we have to ensure we pick up the three points.”

On the need for the important ingredient of consistency, he said: “It’s important we carry this on and try to find that element of the game. We’ve had three competitive games and won two, but we have to drive on now.

“There can be no complacency and we can’t live off results. The reason the top players are playing where they are is because week in, week out, they perform. We have to show we’re capable of that.

“We’ll prepare as we always do but how we perform is a lot to do with the players. One of the reasons we’ve had such a tough pre-season is that I hope after a Tuesday night game we can recover sufficiently enough so we’re ready to go again on Saturday. It’s a gruelling programme for us, but if we’re going to be successful consistency is going to be key.”

MANAGER: It's a game to look forward to


United boss Chris Beech spoke to us about tomorrow’s relatively short trip to Holker Street for the ‘local derby’ meeting with Barrow.

MANAGER: It's welcome back Jon


When midfielder Jon Mellish bagged his second goal on Tuesday night it became the fourth time this season that he’d registered a brace – and it also took his league tally to 10 with his overall goals...

GALLERY: Images from the Saturday away game


Jack Armer scored his first ever goal, and Ozzy Zanzala continued with his current impressive run as United drew 2-2 at Holker Street on Saturday afternoon.


A goal before the break from Adam Walton and a second half strike from Keelan Leslie saw the young blues through to another victory at Creighton.