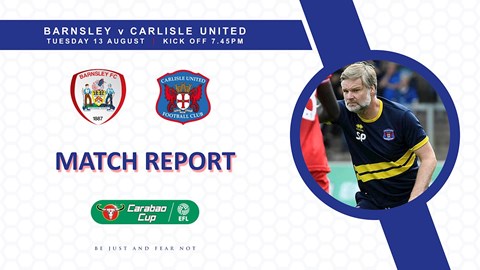 MATCH REPORT: Summary from the away game

“It’s an amazing performance and it shouldn’t be underestimated,” he said. “They made some changes, but they had a really strong team out; it was a Championship team.

“Although they had a couple of moments in the game, I thought the score wasn’t actually a true reflection and we could have won by more. We had a few cleared off the line and we hit the post and the bar, so the players should be really proud of themselves.”

“It was a truly amazing effort from the players,” he continued. “I spoke to them after the Swindon game on Saturday and we’ve done a lot of work between then and now.

“We have to pride ourselves on the fact that nobody works harder than Carlisle, nobody. When you go through the pre-season we’ve gone through, we did it for a reason. The reaction of the players was amazing in this game, to a man. Even our subs made a contribution, and the players deserve huge credit for how they played.

“Our travelling support will go home very happy. To see that many of them was amazing. Travelling here on from Carlisle on a Tuesday night is a big commitment, and I’m thankful we’ve sent them home extremely happy.”

On going toe-to-toe with the newly promoted Tykes, he commented: “Sometimes you come to Championship grounds and feel a little bit inferior.

“The psychological aspect in these games are one of the most important. Once we settled into it after about 10 minutes, I think we realised ‘hey, we can compete here’ and we certainly went on to do that.

“As we were walking up the tunnel at the end Bryon [Webster] said to me that tonight is now the standard they’ve set for themselves. I said to them after the game that it can’t just be for tonight, we have to follow that up on Saturday. We can’t live on the back of one good result, we have to follow it up in the next game.”

With the Blues having fluffed their lines on a number of occasions before they bagged all-important first goal, he admitted that there were some concerns that they hadn’t managed to grab a goal before winger Harry McKirdy slotted his second of the season into the net just past the midway point in the first half.

“We missed a couple of chances before the first goal and you do always have that doubt in your mind when that happens,” he confirmed. “We played against a team who play pure and try to build the play, and I think we got our pressing bang on. We had a lot of steals that created a lot of good counter-attack moments and that was really encouraging to see.

“I made a couple of changes because on Saturday I felt we didn’t have enough connection to the striker, and we needed additional support to allow us to use our wide players more. It allowed us to get our immediate press applied quicker, but a lot of our other principles remained the same.

“The other change was Jack Iredale, who is a more natural left back, and he was excellent tonight. We also watched Barnsley’s previous two games and they are a big team, so we started with Loft instead of Fela [Olufela Olomola], so we had a bit more height for set plays.

“Our lines were better tonight, that’s one of the things we concentrated on after Saturday. We wanted our defensive line to be higher and more aggressive, and they did that to great effect which helped the whole team.”

And when United were given a penalty when McKirdy was upended inside the area just before the hour, it became clear who the nominated penalty taker was as Jack Bridge strode confidently towards the ball.

“We had a penalty competition to decide who would take them – that was done before the Crawley game – and Jack Bridge obviously won it,” he explained. “Nathan [Thomas] wasn’t happy and I think he tried to blame me that he’d lost the competition!

“The ironic thing is that the referee should actually have let play continue, because Nathan had already scored. Thankfully Jack converted what was a really good penalty. He was another, like Jones and Scougall in the middle, who was outstanding as well.”

On the ongoing summer transfer window work, he said: “We’re still pursuing our targets. I keep saying I’ll know by this day or that day, in terms of bringing a striker in, but I wait on that day and it gets put back.

“The interesting thing is that one of our main targets has actually come back onto the radar after it looked like he was going to go somewhere else, so we now have a couple of options.

“I was told I would get an answer on one on Friday, then it was pushed back again, then I was told Monday, but now I’ve been told I need to wait a bit longer so, like I say, I’m not going to put any timescales on it.

“On the other player I was told I’d have an answer today, but I haven’t had it, so I have to assume that things have changed again. We’ve still got time, there are still a lot of games to be played, and we hope it’ll be worth the wait.”

And on the return of forward Hallam Hope to the bench, he told us: “I’m not sure Hallam will be ready to start on Saturday. We’ll see how he progresses in training this week.

“It was pleasing to have him out there and he certainly made an impact and gave us extra legs towards the end.”