United head to Cheltenham tonight looking to bounce back from a disappointing weekend which saw them dominate their home game against Mansfield on Saturday without ever quite managing to create the chances they needed to turn ball time into points. 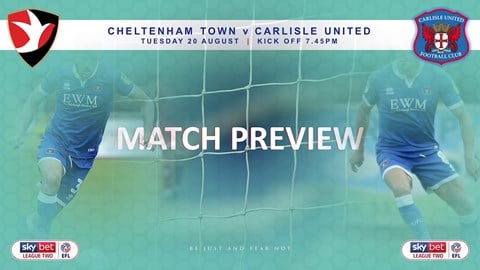 “I told the lads before Saturday’s game, you take your eye off the ball for one second in this league and you face losing the game,” manager Steven Pressley said. “We have to prepare again, and go to Cheltenham and give a similar type of away performance as we gave at Barnsley.

“We keep saying it but consistency is the big thing. I’ve told the group that if we have any aspirations we have to show that. We cannot lose 2-0 to Mansfield on our own pitch.”

“What we must not do is get too low,” he added. “There were a lot of things we did well. We just didn’t do the real things in the two boxes.

“In between we won a lot of personal battles, had a lot of the play, but we just didn’t create those moments or defend those two moments in our box. That’s what the game consisted of.

“It’s now on to Cheltenham and we’ve used the time from Saturday evening to recover, analyse the opposition and go again. We have to go there and try and win the game.

“As I say, we want to obviously go there and give the type of performance we gave at Barnsley, and get back to winning ways. It’s very important for us to do that.”

On the type of game he expects to see, he commented: “They’re strong at home, they’re a good home team. It’s going to be a real test for us again, but we have to go there and try and win the game.

“There’s no doubt it will be a difficult one. We’ve prepared well, as you would expect. We gave the lads the day off on Sunday then we trained at Birmingham on Monday afternoon.

“It was then on to the hotel to analyse several things and get ready to go again. I’ll repeat again, we have to get back to winning ways very quickly.”

MANAGER: We just have to look after ourselves


United’s first home league fixture kicks off at 1pm tomorrow with the Blues hosting the Shrimpers on the magnificent Brunton Park surface.

MANAGER: First goal can be so important in any game


The Blues open up their home league season with a game against Southend United on Saturday, with an earlier kick off timing of 1pm.

MANAGER: Players respond to fans being in the stadium


With up to a thousand United supporters allowed into the stadium on Saturday for the first home league game of the season, against Southend United, manager Chris Beech spoke about how good it will be...


First half goals from Omari Patrick and Josh Kayode sealed a comfortable home victory for the Blues in front of 1,000 socially distanced fans at Brunton Park.


The under-18 side's first home league game of the new season was against Fleetwood Town at Creighton on Saturday morning.


Second-year youth keeper Isaac Robinson has today joined Northern Premier League north west division side Workington AFC on a work experience loan deal, and he goes straight into the squad for this...