United boss Steven Pressley spoke to us ahead of the visit of Mansfield Town on Saturday as he looks for his side to build on the encouraging signs seen in the first three games. 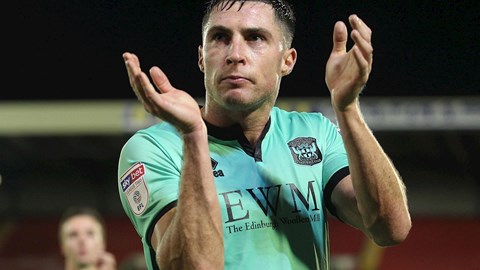 INTERVIEW: You want to do it for the fans

“There are some really encouraging signs, I agree, but I will stress again that this is a new team,” he said. “We’re all still coming together as a group, and the players are working hard to get to where they want to be.

“I’m sure there’ll be disappointments along the way, but as long as we keep reacting like we did on Tuesday night, and we keep improving as a team, then I’ll be satisfied. We’ve been good in stages of all three games but ideally I would have liked to have won all three games so far.

“That’s why the aim on Saturday is to make it three wins from four. That will be a satisfactory return, but it’s still not a brilliant return. That’s why we have to keep striving to keep improving.”

Looking ahead to the Saturday home game, he told us: “The sign of a good team is that it doesn’t dwell on the Tuesday night success.

“It refocuses and immediately turns its attention to Saturday. The big question after a performance like we had at Barnsley is always, can you get back to those levels?

“It’s a feature of all of the top teams that they can do that. Liverpool and Man City can have huge European nights and then go out and perform again in the league at the weekend. That’s what we have to work to do.”

On what he expects to see from the opposition, he commented: “Mansfield are a club that has invested heavily over the last three or four years, as they seek that all-important promotion, and they’ve made some good signings in the summer as well.

“They’re a good side, there’s no doubt about that, but we’ll respect them at the same time as working hard to deliver on what we want to do. If we continue to try to improve in the areas we’ve highlighted it’s another game I know we can win.

“They have a number of strikers capable of contributing with goals, there’s no doubt about that. They’re a well organised side and they have experience in the right areas. They’ve always been competitive and at the top end of the table, so we’re expecting a really difficult game.

“There’s some good physical presence in the team and some good players, so it’s an interesting challenge.”

“They haven’t lost yet this season during game time, even though they’ve found themselves behind on all three occasions,” he added. “That tells you they have a really good mentality and a belief in what they’re doing.

“Being honest, the results they’ve had so far don’t count for much. You always get indifferent results through the early part of the season and it’s over the next couple of weeks that the league and teams will start to settle down.”

And with an almost clean bill of health, he said: “Young Josh [Dixon] had his operation on Monday and that was very successful. His focus can now be fully on his recovery, which is great news.

“Hallam [Hope] trained fully on Thursday and he’s come through that fine. It was his first football fitness session and there are no ill effects. With Kelvin [Etuhu], he’s working hard but it’s not one we’ll put a timeframe on. He’s doing it properly and I know he just wants to be back and out there.

“The rest are fine. It’s amazing because when you’re winning games you find that there aren’t too many tired players. That’s football, and I’m sure our players will be feeling good about themselves just now.”