United boss Steven Pressley gave us his thoughts on the disappointing home result against Mansfield Town shortly after full time on Saturday afternoon. 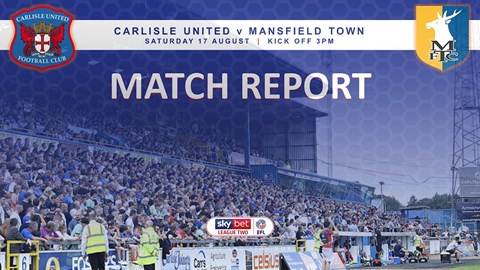 “When their team came in, we looked at what shape we thought they were going to play in, and the personnel, and it looked like a team that had given us huge respect for how we’d been playing,” he said. “But when you play against a team that adopts the tactics that they adopted today, you can’t lose the goals that we did, from really their only two attacks.

“We lost two disappointing goals from their only real opportunities. On the other hand, we didn’t create enough. We’ve been raving about certain players; these players didn’t today quite reach the heights that they have in the past weeks, and we couldn’t break them down unfortunately. There was no lack of effort, but we lacked the quality in the final third.”

Having missed a chance to take the lead moments before the Stags bagged their first, through a Danny Rose volley, he commented: “You have to score these moments when you’re playing a robust side like Mansfield are.

“The way they’d set up, it was important we scored first. It wasn’t to be, and the disappointing factor is we didn’t turn possession into opportunities, or carve out those moments where I felt we could.

“And the manner in which they scored that goal was something we were aware of. It’s a strength they have and Rose is always a danger. We’d pointed those aspects out, but we had to defend them at that moment.

“The timing of the second goal is really disappointing. The ironic thing in football is, they spent all the first half wasting time then, in the added time period, got the advantage of it. It’s still something we have to do better on.” 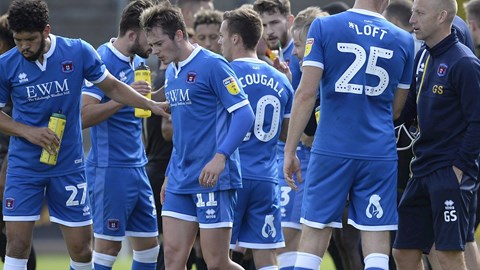 Speaking about the second goal, sparked when United fell foul of a new ruling which means the referee has to pull the game back, should the ball strike his body, he admitted that he felt it was more disappointing because the players were in their defensive shape.

“You’re coming off at half time thinking, how are we losing this game 2-0? In the second half we had so much territorial advantage, so much possession, but we never managed to turn that into real opportunities. We huffed and puffed but never managed, even from set plays in good positions, to really carve out the opportunities we required.”

Having already mentioned the slowing down of the game seen by the opposition, he said: “I told the lads during the break not get frustrated by it. Some younger players sometimes get frustrated and lose their focus on what we’re trying to do, and it can affect their performance.

“I don’t think the referee allowed the game to run and it suited them. They’d come here to spoil, but that’s something you need to deal with and something we need to learn from. It was a game we must win, with the amount of ball we have, but we’ll not win games if we defend the two moments like that and if we don’t carve out enough opportunities that our possession should have led to.

“It isn’t that we weren’t attacking, we just couldn’t find the final pass. Almost the entire second half was spent in their half but they defended the opportunities we created very well and did the job they came to do. That’s something we need to learn from: when teams come here we do need those players who can open things up. Unfortunately that didn’t happen.

“You have to give them credit, they stuck diligently to their plan, they came here, wanted to sit in and counter us, but it’s disappointing that we didn’t defend those moments well. There was a big chance for Harry McKirdy after great play from Nathan Thomas – if he scores it’s a different game and they need to come out. There was a real importance about the first goal and unfortunately they got it.”

United’s intent was clear through the closing stages as the home side ended the game with four strikers on the pitch.

“We had to go for it,” he explained. “We had the players on there but we couldn’t find that creative moment. If the players who can do that naturally aren’t making these moments, it means others have to.

“We all have a responsibility to create and none of us managed to do that today. That’s the disappointing factor – not the effort or application, or the way we went about many things. It was the two moments in our own box and that we didn’t create enough in the other box. Unfortunately, that’s why we lost the game.

“They applied certain antics during the game to try and break our rhythm, but the disappointing factor was we had a lot of ball, didn’t defend two moments in the first half particularly well, and we didn’t create enough clear-cut chances.

“If we’re coming up against a side which is defending resolutely, we have to then find the answers. Even when I look at the game, we pressed them really well in our immediate press, they kicked long and we regained possession and went again.

“We may not be getting the steals at the top end but we’re forcing them to kick long and getting regains. We are being effective in that sense. It’s just from those positions, we need to then have the quality to break teams down.”