United boss Steven Pressley struggled to hide his frustration at a decision which came late in the game against Rochdale on Tuesday when the officials decided not to award a penalty for what appeared to be a handball incident as Harry McKirdy attempted to clip a cross into the box past the challenge from Jimmy Keohane. 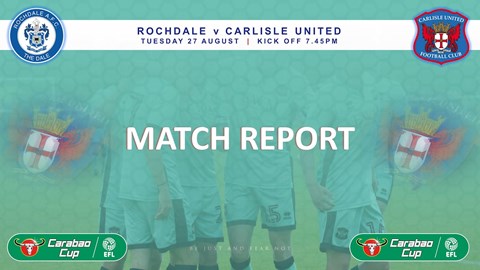 MATCH REPORT: From the Rochdale away game

With the visitors convinced the ball had been stopped by a raised arm, he said: “I’m not one for talking about incidents, but once we got ourselves back into the game we should have had an absolute stonewall penalty.

“I’ve been into the referee’s room after the game to speak to them about it. What was explained to me at the manager’s meeting with have with referees was that if your hand is in what you would call a natural position, and the ball hits it from a yard away, then it isn’t a penalty, and I accept that.

“But if the hand is in an unnatural position then it’s a penalty. Tonight, it struck his hand which was almost up at his head. It’s as stonewall as you’re going to get. I cannot understand for the life of me how he doesn’t give it.”

“When I spoke to the officials about it, they said they weren’t sure the hand was in an unnatural position, but they’ll look at it. I haven’t gone on about it up to now, but I’m getting sick and tired of it because we’ve had different situations in our last three or four games.

“There was a handball at Cheltenham, there was a foul on Byron [Webster] on Saturday and a penalty that wasn’t absolutely clear, and then we get that tonight. I’m going to speak to the referee’s association tomorrow because I’m not satisfied.”

“Are they saying we don’t matter? Are they saying decisions against my team don’t affect me? Do decisions not affect livelihoods? It’s disrespectful, because I think we’re suffering, and I think the refereeing is of a bad standard at the moment.”

Speaking more about the overall performance, he told us: “It kills me because the players were amazing tonight, and I’ve never seen a team work as hard as they did.

“To a man, they were incredible, and you saw the reception they got off the supporters at the end. I’ve never ever been more convinced about the way we are playing than tonight.

“In terms of work ethic, that was as hard working a team as you will see. I’m proud of them, and I said in the dressing room that I hate losing, but there’s always a way to lose, and that was the right way to lose.”

Having gone into the break with a two-goal deficit to make up, and having dominated most of the 45 minutes, he confirmed that the same sense of frustration was felt as had been seen at the weekend with the goals conceded against Salford.

“Half time was a similar story to Saturday,” he confirmed. “We came in 2-0 down but we’d actually played very well in the first half.

“I think Adam [Collin] maybe had one save to make, and we find ourselves two behind, which is incredible. We reacted properly in the second half, but we have to eradicate the mistakes.

“Until we do that, we won’t win the games we deserve to win. The players know how close they are to being a really good team, and it will come, there’s no doubt in my mind.”

“We know we have to stop causing our own problems and stop giving ourselves mountains to climb,” he said. “But, if your team works like they did against Rochdale, and play the football that we played through the 90 minutes, we’ll be a good team.

“We’ve got a real chance and we will get there. Something I also haven’t mentioned yet is that we played the last 20 minutes with ten men, and we ran them into the ground. It was an amazing effort from the group, there are so many things that conspired against us tonight, but we didn’t feel sorry for ourselves.”

On how we can turn performances into results, he told us: “I’ve got absolute belief in our players. The one thing I’ll say is that I’ve been there before as a defender who has made a mistake, but you need to play through these periods.

“We have good players in this group who are playing some extremely nice stuff. That has to become results, we one hundred percent accept that, but that’s going to come if we keep creating the quality of goalscoring opportunity we’re seeing at the moment.”

With midfielders Mike Jones and Stefan Scougall having limped from the field of play during an all-action second half, he said: “It’s too early to say and I hope it’s just fatigue. Both players said they didn’t think they’d felt a pull, they thought it was fatigue, and we can only pray that it is, because both are such influential players for us.

“We’re going to have to be very careful with the players between now and Saturday because of how hard they’ve worked. We’ll find out in the next 24 hours about injuries, but it will be a case of wrapping them in cotton wool.

“With all of the players, it’s important to hammer home how well they’re playing. In defeat you’re always disappointed, but I want to concentrate on the positives. I think confidence within the group went up, you can always be clouded by the result, but the performance of the team was amazing.

“We all know we have to win games and that football is about winning, but we were playing a good League One club and we came and dominated the game, which is quite amazing.”