Manager Steven Pressley spoke about the need for the team to come out of the blocks quickly at his pre-match press conference as the Blues kick their season off against Crawley Town on Saturday afternoon. 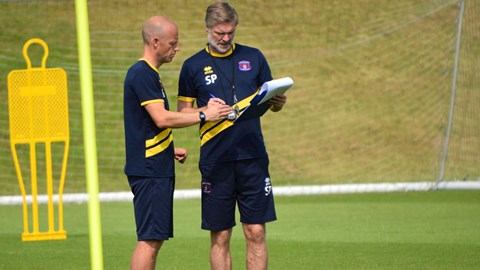 MANAGER: It bodes well for a good start

“I think it’s very important that we look to get off to a good start,” he agreed. “It can set you up nicely and bring a confidence to the team, and a real excitement to the supporters.

“This part of the season is sometimes a little bit untrue in terms of the fact that you play on nice pitches in the sunshine, and we all turn up with our tshirts on. The real stuff doesn’t start until November.

“What we want is to be in a good position come the more difficult months so that we’re ready to mount a challenge.”

On opening the season up on our own patch, he commented: “I was delighted when the fixtures came out and we were at home for the first game.

“It gives you a chance to show your own fans the benefit of the work you’ve put in and we now must go about it in the way I believe we can.

“If we do that, and we play with the intensity and with the pressure we want to see, then I think we can be an exciting team.”

“The bottom line is that it will be a difficult game,” he continued. “We’ve watched their last two pre-season friendlies and they are very well organised, and they understand their roles and responsibilities.

“The coach [Gabriele Cioffi] is somebody I’ve become friends with. He’s on an LMA diploma course with me and he’s a really good guy. He’s an intense football man and I know his team will be ready for us.

“They’ve added to the nucleus of the group that played last year and they have a big squad to choose from. By the looks of it they’re an ambitious club, but we have a little bit of insight to them with Nathan Rooney, who was there last year with them.” 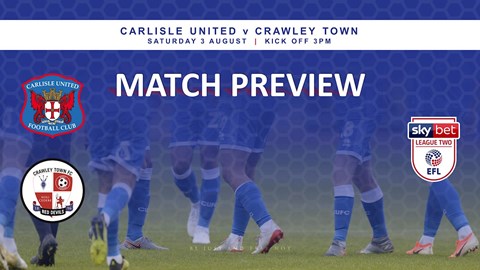 “For me the biggest thing for the weekend is that we concentrate on ourselves,” he told us. “We’ve worked over a lot of phases of our play this week and we must be at our best for this game.

“I really am excited by it, I can’t wait. You can feel the tension building and I like it when there’s that kind of tension. I think it’s a good thing because it brings an edge to the game.

“I’ve often found when you can feel the tension in a dressing room it’s when you get the best performances.

“We’ve worked so hard as a group and as staff for this moment. I look back at the runs on the beach and some of the other physical work we’ve put them through, with hardly a day off at all, and I know that we then can’t come to this point and pass it up.

“We have to ensure that come Saturday we’re showing everybody why we’ve done that work. It’s really important after all that hard work that we don’t let ourselves down as a group.”

Having seen the team fall to a defeat in the last friendly of the summer up in Scotland, he said: “There’s no doubt we were the better side in the first half, so I spoke to the players about that and I told them that their performance overall was ok.

“However, ok isn’t good enough for this group. We have to be better than that. I expect the type of football we saw for 40 minutes against Fleetwood and for the whole game against Tranmere. That’s Carlisle, that’s the way we want to see our team play.”

And with that in mind, he revealed that he was using this week to put the onus on the players as he asks them to set their own targets for the coming campaign.

“What I can promise the fans is that they’ll get hard work and they’ll get absolute commitment from this group of players and staff,” he said. “There’s nothing more than that I can promise, other than we’ll be working exceptionally hard to try to bring success to this club.

“I’ve talked to the players, I’ve put everything on the table and I’ve been very clear and transparent with them. I’ve asked them to tell me what they think we can achieve, and it will be interesting to see what they all feel about what they want us to do.”

As for whittling things down to a starting eleven, he said: “There are a few selection headaches, but not as many as I would like, because I think that competition for places is really important.

“That’s why when we get the other three or four players in it will be a very competitive squad, but it’ll be a dressing room where every player feels part of the group.

“I have it in my mind what I want us to do, and it’s up to the 11 selected to go out and try to do the things we’ve been talking about as effectively as they possibly can.”