Newcastle United loanee Elias Sorensen came off the bench to make his debut for the Blues on Saturday afternoon and manager Steven Pressley was quick to praise the teenager for the way he set about settling in quickly following his Thursday night arrival in Carlisle. 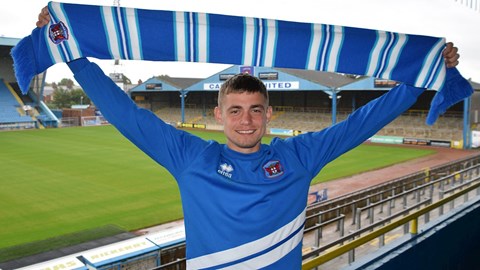 INTERVIEW: There's a lot of competition in the squad

“I’ve said this before, because we have a lot of the players in the houses, they settle in much quicker than anywhere else,” the gaffer said. “He was in there on Thursday with the players, and on Friday night, I’m sure he’s settling in now.

“Hopefully it’s going to be a good environment where he can really prosper. It was good to get him onto the pitch. We hoped he could provide us with the impact we wanted, it wasn’t the case, but I’m sure we’ll see a lot more of him in the coming weeks.

“In terms of his fitness, I need to see that over the coming weeks. We’ve not really done a physical session with him so it’s difficult to find that out, but hopefully in the next couple of weeks we’ll know where he is.”

“I think he’s very effective in that way but the way Mansfield set up, they tried to kill the space in behind, so we didn’t manage to quite utilise him as we wanted to. But I think he’ll bring a real threat behind and he’s a real goalscorer.

“He can play through the middle, or off to the side, and that’s an important factor as well.”

With loan spells often bringing requirements and obligations on pitch time, the manager confirmed that there were no such stipulations in this case.

“It’s entirely in our hands,” he revealed. “It’s like every loan player, they want them here and they want them to play, but they respect that us managers have to make these decisions.

“With Elias coming in I see this as my squad complete now. Unless something happens between now and the end of the window, I’m very satisfied with the squad at this moment.

“There have been no bids for any of our players to go the other way as yet. We’re happy how it is just now, hopefully that will remain the case, but you never know in football.”