United take on Swindon Town in their first away game of the new season on Saturday afternoon and both sides go into the game full of confidence off the back of opening day victories. 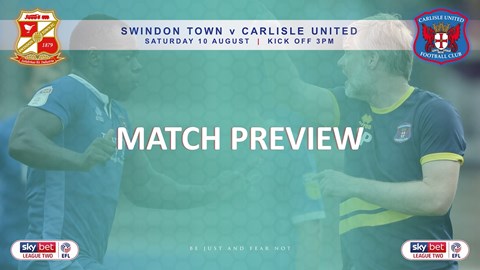 MATCH PREVIEW: The Blues go bobbing along to meet the Robins

Carlisle boss Steven Pressley spoke to us about what he expects to be a tough encounter at his pre-match press conference.

“We’ve had a down week in terms of the players,” he said. “They had a planned three days off and then we’ve come back into it today [Thursday]. That has allowed the lads to recharge their batteries and the staff to refocus, and we’re all now ready to go for the next six-week cycle.

“The time away meant I was able to go to watch Swindon play Chelsea on Tuesday night, which gave me a little bit of insight, even though there were quite a number of changes, not only in the shape of their team but the personnel.

“We don’t know fully how they’ll go about things on Saturday, but we can only prepare on the two games we’ve seen thus far. Based on what I’ve seen they’re a very good transitional team and they’re quick on the counter-attack.”

“They have two quick wide players and Jerry Yates has very good pace through the middle,” he added. “Keshi Anderson is behind him, so the front four have real speed and mobility. They’re very effective at what they do, as their two goals against Scunthorpe proved.

“To deal with that we’ll need to get the balance of the team right at the correct moments. We’ll need to make the correct decisions when we’re in possession because that’s when they’re at their most dangerous.

“If we do the key moments correctly and effectively, I think we can go there and get the right result. The pitch is excellent down there and it’ll make for a very good game of football.

“With Jerry in particular, I didn’t work with him, I came into the club after he’d left, but he’d made a real impression on the coaching staff, the players and obviously our own supporters. At that time He’s a good player but I’m also very pleased with what we’ve got in our club.

“I believe that given time our players will prove to be really good signings for this team. There’s still so much work to do ahead of us, we all know that, but the signs are very good as we sit here just now. We’ve been impressed by the way the players have gone about things.” 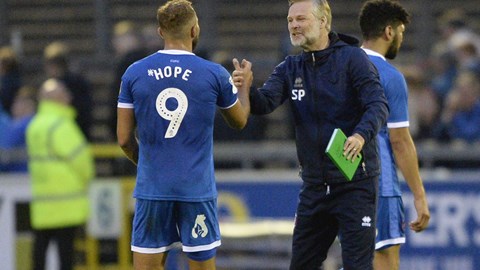 On how he wants the team to approach the game, he told us: “It’s important that we respect what they are - but very much focus on delivering what we are.

“Bar a few amendments every game, we have a clear way we want to go about things and it’s about continuously trying to deliver and improve on that.

“We’ve worked hard on that again and we’ll keep looking at ways all the time for us to continuously improve. There’s a great spirit amongst the group at the moment and we’ll keep doing what we can to get better and better.

“Aspects of our game were exceptional against Crawley, and we actually had the highest amount of interceptions in the league from Saturday’s games. I think that bodes well because it proved that we were in correct positions where we could make the correct interventions at the correct time.

“Look, there’s a lot of things we can improve on. Our forward movements can be better, and we’ve worked on that, and our final decision once we’ve broken the lines can be much better. These are all areas given time that we will improve.

“I was really happy with the way the squad approached a difficult game last weekend, but I still want much more.”

With spirits high in the dressing room, he commented: “I do think we have a really good group here. Part of our recruitment drive was to bring together a group with the right character and I think we have that.

“You always get the difficult characters, that’s normal but, on the whole, we have a good group together.

“As I say, both teams will go into the game with a lot of confidence and it’ll be a good test for us. It’s a game I’m really looking forward to because it will give us a huge indication of where we are.

“We had an in-depth analysis session on Thursday morning where we showed the players a couple of things on Swindon, but I stressed that Saturday is about us. It’s about what we do and how we play our game that matters.”