United boss Steven Pressley spoke about the good feeling he’s getting from his group following the first game of the season on Saturday – a home win against Crawley Town – but he refused to get carried away, despite what had been a solid performance. 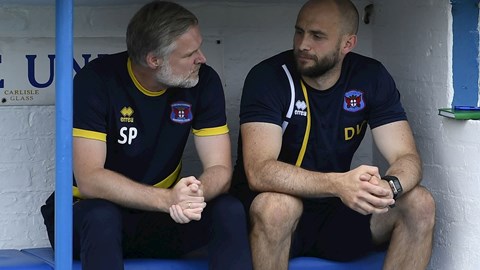 MANAGER: Mentality and Psychology are important

“The most important thing was that we won and scored a couple of goals,” he said. “It gives the supporters hope, and we understand they’ve been nervous about the recruitment and the patience we’ve showed.

“Hopefully that performance gives them something to hang on to, but we’ve got so much work ahead of us, I know that. I’ve got a good feeling about these players, I like the group we’ve put together, and for the period of time they’ve been together they’ve gelled brilliantly. I’m really proud of them.

“As I’ve said, they’ve done the hard yards and they are now at the end of a six-week cycle. This is more of a down week, for them to recharge, and then they’ll be ready to go again.

“I hope we’ll push on, and I’m really encouraged that we took an important first step. Getting off to a winning start helps everything you want to do, but we now have to do things properly next weekend again. The players will enjoy their little break, but we’ll then have to prepare for Swindon away.”

On the way the players implemented the tactical side of the game, he told us: “It was really pleasing, but we have to do this more through the course of the season.

“We don’t want to get ahead of ourselves but, through the summer, I wanted to have a way of recruiting and a clear way for how I wanted to play. We had to get the right players for each position and I think we’ve done that.”

Claiming the victory wasn’t all plain sailing as Crawley threw men forward in a bid to try to level the scores ahead of the full-time whistle.

“I said to them after the game that the hard yards, the sand dunes and the running are all worth it when you can see a game out like we did with the mentality we showed,” he commented. “The players deserve great credit because it was really hot out there. The conditions were difficult for both sets of players, but the most important thing in the first game of the season is the result, and thankfully we got that. 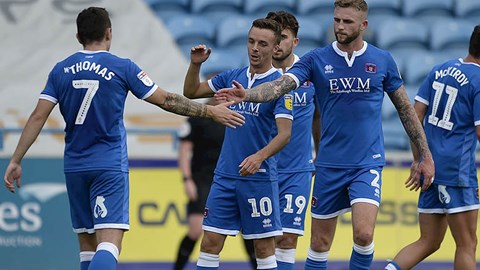 GALLERY: Action from the Crawley game

“As a manager when you’re only one goal ahead you’re never comfortable, because it only takes a slip or a mistake to change everything. I thought the team managed the end of the game brilliantly.

“When the ball came into the box and we had to defend, we showed real desire. When we had to run the extra yards, we showed that desire. I thought it was a really professional performance in the end.

“We were obviously disappointed not to get the third goal, which we thought we had, and that would have allowed us to see the game out more comfortably. In the end it was a brilliant result and the players deserve a pat on the back. I did think Stefan’s shot went over the line, but my angle isn’t the best and I’m answering the question with a lot of bias, in my view.”

“It goes without saying that we’re delighted with the three points. I thought it was a terrific turnout from the fans and there was a really good feeling from them. I know there’s more fluency to us than we showed today, and I know there are things we can do better.

“One of the things that is key to any team having any success is the desire and togetherness, and I thought they were amazing in that. I see a group of players who I think the supporters can relate to and players who are going to work exceptionally hard for this club.

“I’ve made no promises this year other than as staff and players we will work exceptionally hard, and I think if we give that then the supporters will really appreciate it.”