The Blues head to Oakwell to face Championship side Barnsley in the first round of this season’s Carabao Cup competition tonight and we spoke to United boss Steven Pressley to get his thoughts on the game. 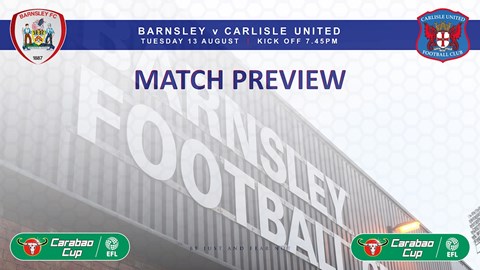 “We all get excited by games like this and it’s a chance for us to go there and get ourselves back on track,” he said. “We’re going there to win the game, there’s no doubt about that, and it’s a great challenge for us to look forward to if we want to achieve that.

“We go to Barnsley without any real expectations on us, but that doesn’t change the way we’ll approach it. We have to do the things we’re good at, whatever level the opposition play at, and we have to show good energy and commitment from the very first whistle.”

“I’ve watched how Barnsley play and they are very well organised,” he continued. “They showed against Fulham that they can defend difficult situations, and they have plenty of threats going forward.

“They’re newly promoted and they will still have confidence from that, and I have no doubt that they’ll be looking for the consistency in results that every team craves at this stage of the season.

“We’ll show them respect, of course we will, but we also want to show what we can do. The cup competitions can be really exciting for our supporters and they’re a chance to put ourselves back on the map. We’ll be going there to try and impose ourselves on the game and to try to win it.”


Youth second year keeper Isaac Robinson had a real baptism of fire on Saturday as he played for Danny Grainger’s Workington side in their 2-2 away draw with Pickering Town.


Manager Chris Beech spoke more about Saturday’s home victory over Southend as he looked back at was a good performance on the home turf.

MANAGER: We just have to look after ourselves


United’s first home league fixture kicks off at 1pm tomorrow with the Blues hosting the Shrimpers on the magnificent Brunton Park surface.

UPDATE: From the chair of the EFL


On behalf of EFL Chair, Rick Parry, the EFL has provided the following update:

YOUTH: We can't complain about the result


It was a disappointing day at the office for the young Blues on Saturday as they struggled to get going, and they suffered a defeat because of it as Fleetwood snatched the winner with their only shot...

MANAGER: The shape suited the players


As the focus for the Blues turns to the weekend trip to Scunthorpe, manager Chris Beech spoke about the need to find consistency in performance levels following last weekend’s home win over Southend.


The Sports Ground Safety Authority (SGSA) have been working with UK Sport and the University of Edinburgh to develop a short 10-minute survey to understand the perception of spectators who attended...