Midfielder Mike Jones has been one of the stand-out performers for the Blues so far this season as he settles into his fourth season with the club, having agreed another deal in the summer which kept him at Brunton Park for this year’s campaign. 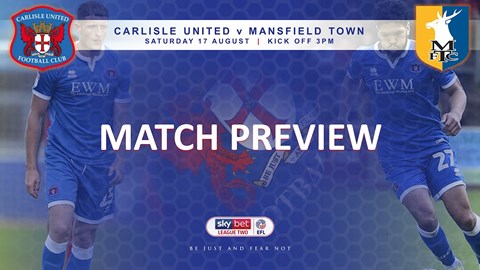 Looking back at what has been an exciting few weeks, he spoke first about the excellent superb away performance at Barnsley on Tuesday night.

“It was a good night for us, particularly after the disappointment of Saturday,” he said. “That came off the back of a good start against Crawley, so it was a nice pick-me-up, if you like.

“To go there and do that to any Championship side, whether they made changes or not, is some going for us. Realistically, although the possession stats say different, we could have had a few more goals as well.

“I was just saying to the lads in the dressing room that it wasn’t like a 3-0 snatch and grab, we could easily have added to the goals. I think it was a well-earned victory and just what we needed.”

“That’s because Saturday was obviously disappointing for us,” he continued. “The most disappointing thing about it was that we’d put ourselves in the position where we were ahead after about an hour of the game.

“The first half was tough, but you go to a good team like that and you know you’re going to have to ride the storm a little bit. We did that and you think tyou’ve done the hard work because we knew we’d then be with the wind after the break.

“We got the lead, so to then do what we did was criminal. It was the second game of the season, and we spoke afterwards about the fact that we’re still learning and that it’s a new team, so hopefully that shouldn’t happen again.”

“That’s why the response on Tuesday was so important,” he commented. “We don’t want it to be up and down, we’ve got to find that level of consistency, but it was good to bounce back.

“We have to remember that it’s early days, we’ve only had three games, and realistically there’s been half an hour of real disappointment from last weekend. Apart from that it looks like we’ve been bang at it and things are looking really promising.

“We obviously put a lot of work in through the summer and, even though there’s a lot of new faces, it doesn’t really feel like that. It already feels like we’ve been together a long time and everyone is getting on really well.

“There are some big characters in the squad and it really is exciting. If we look again at Tuesday and think about what we can do to a team like that, all we have to do is take that into the league and teams will have to fear us.”

On his own excellent early-season form, he said: “It’s my fourth season here now and you know what I set out to do when I first came to the club, but it still hasn’t been done.

“Every year that goes by where we haven’t achieved that makes it more frustrating. There’s maybe a kind of anger in there as well, and it gives me a willingness to finally achieve what I want from this football club. I want us to be promoted, it’s as simple as that.

“The reason I’m excited now is because the gaffer looks like he’s got a great set of lads together and hopefully we can go on a journey and get the job done.

“The manager wants us to play in a certain way, he’s made no secret of that, and there’s nobody who loves getting on the ball more than me. On the other side of that he’s asking for high intensity football and he expects us to graft in training and every time we go onto the pitch.

“That kind of thing comes naturally to me and I always feel like I give everything anyway. I really enjoy playing for the manager and the chance to do that was a big part of me coming back here in the summer.”

With Mansfield the next visitors to Brunton Park, he told us: “We started off well at home with the win over Crawley, but this will be a tough game.

“They’re one of the clubs who will be up there and they’re a strong team with good strikers. If we’re going to get the success we want we know we need to win the majority of our home games, and then you get what you can on the road.

“That’s generally how you get promoted, so we’re looking to take that on and, off the back of how we played on Tuesday, I don’t think they’ll be looking forward to coming up here too much. We’ll be looking to start the game well and then we’ll see what we can do.

“The other thing is that you want to do it for the fans. It was a great following on Tuesday, with 385 of them there, and that’s different class. You know what I’m like, I always speak highly of the fans, so hopefully we can give them another three points and send them home happy on Saturday afternoon.”