Striker Olufela Olomola picked up the InvestAcc man of the match award on Saturday as he caught the eye with a very disciplined personal performance. 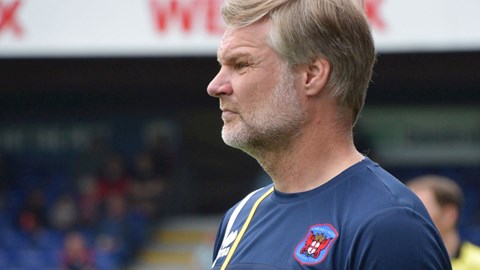 MANAGER: A key to success is desire and togetherness

We caught up with him after the game to talk about his memorable debut for the Blues ... which almost brought him a goal.

And on having pulled on the shirt for the first time, he said: “I enjoyed it a lot, but the most important thing was that we started off with three points.

“I loved it out there. I know I still need to get my match sharpness and match fitness up a bit more, but I thoroughly enjoyed it.

“That’s the first game I’ve played with the lads, but they’re good players. I get on with everyone, all the boys have been great with me, the coaching staff have really helped me, they’ve really made my stay here easy.

“I just need to keep working hard and getting my match-fitness and match sharpness up - and goals! I can hold up the play but also when I’m at my peak I’m a very good goal threat. That’s something I’ll be looking to do this year.”

On playing with his back to goal for much of the game, he told us: “I need to be a target man, to bring the team into play, especially the way we play – I like to get it down and play football. It’s vital that when it comes to me it sticks and that I can help the team play.

“I’m just focused on winning games. Of course I would love to score goals but first I need to win. I love to win, I just want to win at all costs, that’s the main focus while I’m here.

“The team depend on me to hold up the ball, ultimately that’s my job, and to run in behind and score goals. That’s just something I need to keep working on. As I keep playing with the players, they’ll get to know me more, I’ll get to know them more, and hopefully we’ll be able to build up an even better understanding and relationship.”

The full-time whistle brought a loud ovation from the home fans as the players stayed out on the pitch to say thank you for the excellent support.

“The fans were excellent and of course, everyone’s happy, but at the same time we’re not going to kill ourselves,” he insisted. “It’s only the first game of the season. We’ve still got loads and loads of work to do.

“There are definitely things we can improve on from that performance. Everyone’s in good spirits but we’ve got to keep working now and pushing. For me personally it’s just about helping the team as much as I can, whether that be scoring, assisting, being a part of goals, I just want to help the team as well as I can. 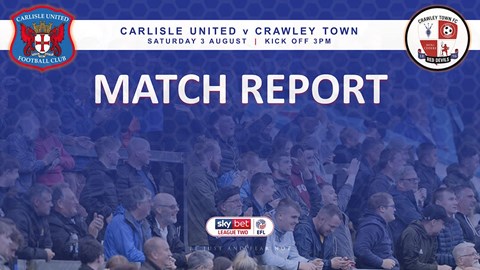 “But the way the team play, all I can say is wow. The intensity in the play, the work-rate of the team is phenomenal. I can tell they’ve really been pushed this pre-season. The intensity they play at is something I need to get myself up to.

“Hopefully that will come quickly, that’s the plan. I’ll definitely be doing extras and getting myself as fit as I can and as sharp as possible as quick as possible.”

And on picking up the man of the match award, he said: “I didn’t hear the announcement during the game, to be fair. At the time I was focusing on making sure we got the three points. I was still on edge, I didn’t hear it.

“It’s nice though and the fans gave me a great reception. Without the fans there’s no club. The fans are the heart and soul of this club. I’m glad they enjoyed my performance on Saturday.

“I can take a lot of confidence from this and it’s really put me in good stead now. That’s the level I’ve set myself and I just want to get better and better.”

But with Ryan Loft to add to the mix, and with another new striker targeted, he’s fully aware that there’ll be plenty of competition for starting places in the weeks and months ahead.

“I’m happy with that,” he said. “Competition is good, I want more. I would invite that, I want us to have a strong squad and players that will help the team do well. But of course, it is a small squad, so there will be chances for everyone.

“Every game in this league is going to be tough. It doesn’t matter how they’ve played previously. Every single game is going be tough, so it’s important we enjoy this victory, but we need to move on quickly and be ready for the next tough test.”

One other nice moment from the day was just before the first whistle blew when the player took a few moments to himself to perform what he revealed is a pre-game ritual.

Click HERE to watch an interview with Olufela Olomola on iFollow United now.