Youth second year Taylor Charters has spent the bulk of the last six weeks training with the first team squad and he hasn’t looked at all out of place, with his efforts bringing a contract offer which saw him agree a two-and-a-half year deal on Thursday afternoon. 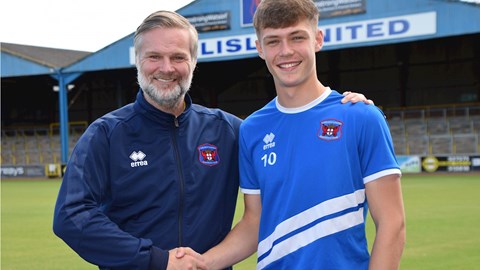 Having joined the club at just eight years old, courtesy of a six-week trial spell [much of which was conducted in the club’s Neil Sports Centre] he admitted that it was a dream come true to have signed his first professional contract with the Blues some eight years down the line.

“I’m buzzing,” he said. “It’s even better that this has happened after the hard pre-season we’ve had, so it’s nice to get the reward at the end of it.

“To be honest, I had no idea that this was coming. I think I’ve been doing quite well when I’ve trained with the first team, so I’m just pleased that I’ve impressed the gaffer.”

It was at the start of this week when director of football David Holdsworth and manager Steven Pressley first spoke to Taylor and his parents about the deal, with a successful conclusion swiftly reached with the midfield playmaker.

“I didn’t know what to think when I first found out,” he confirmed. “I just carried on as normal in training, but now that this has happened I feel like I can really push on through these next two years.

“I’ve always been quite confident but it’s good to know that the manager has got faith in the young lads like this. It gives us a real chance to impress and progress with the way we play.

“I watched the same thing happen with Keighran [Kerr], Josh [Dixon] and Jarrad [Branthwaite] and when you see what they’re doing, you just want to be there trying to impress the manager as well.”

For those fans who haven’t yet had the chance to see him play, he explained: “I’m an attacking midfielder and I like to get on the ball and create stuff, but I like to work hard in defence as well.

“It’s always nice to help with a goal, but there’s a lot of other things I can help with when it comes to doing what we need to do to get three points.

"The manager has told me that he wants to see me keep pushing on and he said that my aim should be to get into the first team as quickly as possible.

“I still have the second year of my scholarship to finish, but that’s fine, I signed up for it and I’m enjoying it. Obviously when I came into the under-18s my aim was to get a contract and it feels unreal to have done it.

“I can’t really put into words how much it means. My mum and dad were here when I signed the contract and they’re very proud.

"They’ve put a lot in to helping me get to where I am, and they’ve helped me through the eight years I’ve been with the club with everything I’ve needed.”

“There has been plenty of hard work from everyone to help me to get this far, but I know that it doesn’t stop now,” he told us. “If anything it gets even harder, so I’ll carry on in the same way I have been doing and I'll keep trying to improve.”

With the rest of the under-18 group over in Hungary on an Erasmus+ tour, he said: “They’re sunning it up while we’re training, so a little bit of me wouldn’t mind being with them!

“It’s always good to be involved with the first team though, because it improves you as a player as well. I'm learning a lot and I'm really enjoying it.”