United boss Steven Pressley gave us his reaction to the away defeat at Stevenage shortly after full time on Saturday afternoon. 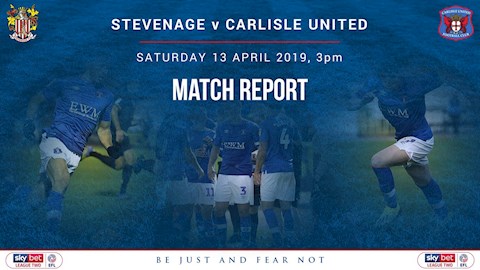 MATCH REPORT: A summary of the action from Stevenage

“As the scoreline suggests it was a very disappointing afternoon,” he said. “It was a game we felt we could come and win but, in the end, it was a disappointing performance.

“We lacked physicality and strength over the 90 minutes and we didn’t win the one-to-one battles, and that became a major problem for us.”

“Once again we lost two goals from set pieces, which is extremely frustrating,” he added. “The first one was from a first phase and the second was from a second phase.

“I’ve told the players that they analyse these things at Premier League level and they talk about the tactical elements but, in this league, trust me, if you don’t do the basics of the game well you tend to lose.

“Part of the basics I’m talking about are one-to-one battles, defending set plays and defending key moments. We have to do better with all of that. I also understand that we’re lacking a little bit of strength at this moment in time. We’re definitely lacking physicality, we’re not a big side, and we are working hard as a group to try and defend these moments better.

“Stevenage’s strength showed because they won the personal battles, but I accept that we have to be better on these things.”

“The other disappointing aspect of the day is that I felt we were tentative in the opening 15 minutes, and we didn’t show any of the aggressive side we’d worked on in training,” he commented. “We didn’t pressurise the ball which, if we had, would have given us more chances to break.

“We looked passive and that’s what disappointed me most in the game. We can’t feel sorry for ourselves. Make no mistake, nobody is more disappointed than I am, but we have to react and make sure we’re ready for Friday.

“What we have to do is keep believing that an opportunity to finish in the top seven is still very real for us. However, make no mistake about it, if we’re serious about making a challenge for the top seven then we have to win games.

“It’s still achievable in the sense that if we win all four games we’ll make it. Based on our inconsistent form I’m sure people won’t feel that’s likely, but we must keep believing. We can’t give up hope even though it is a tall ask for us.”

Refusing to use injuries to key players as an excuse, he told us: “Unfortunately we’re having to put round pegs in square holes at the moment, and I don’t like doing that.

“You end up making three changes for one change, if you know what I mean, so if you’re faced with injures you have to find a way with the players you do have.

“Obviously losing Jamie [Devitt] was a blow. He’s a massive player for us. He’s our second top scorer and our highest assister. That, in itself, tells you how important he is. He’s struggling with a hamstring issue so he’s likely to miss a couple of weeks.

“The physicality you would get from Kelvin Etuhu was also a big loss for us. His presence would have made a difference, but we don’t know the full extent of his ankle injury at this stage. He wasn’t able to train at all in the latter part of last week, so we’ll just have to see how it settles.

“On top of that we have Danny Grainger, who suffered a little bit of a niggle at the end of the week, so I’m mindful that he could miss the weekend. Hopefully Mark Cullen will be training at some point, but he’s still a little bit away from starting for us.”

Having given striker Connor Simpson the first start of his loan spell, he said: “When Connor has come on in the past and he’s made an impact in a couple of games people have got a little bit excited and ahead of themselves.

“I’ve been trying to bring a reality to it because he’s only a young lad who is trying to find his way in the game. We’ll continue to work hard with him because we want to improve him, but he’s probably not quite ready at this moment in time.

“The reality we have with the injuries and suspensions is that we had to play him. It was a game where we lacked physicality and I hoped Connor would give us a bit more of that, but he’s not quite there yet.

“I don’t want to be critical of him, because he’s a young lad who is trying to find his way, but the situation we faced was that we lacked strength and a presence. We were a team that was turned over by a team that was stronger and more physical than we were. That was ultimately our biggest problem from the game.”