United boss Steven Pressley gave us his reaction to the dramatic home victory over Bury shortly after full time on Saturday afternoon. 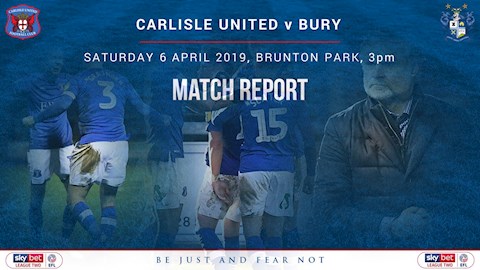 MATCH REPORT: Summary of the game against the Shakers

“It’s an amazing result and one that our players deserve enormous credit for,” he said. “When you’re 2-1 down and a man down at home it takes a special mentality and a special reaction to get the type of result we got from the game.

“The lads showed an unbelievable amount of character and I think all their hard work in recent weeks has been rewarded. The performances in two and a half of the last three games have been very strong but, as we know, we didn’t manage to take maximum points.

“I didn’t think the first half was our best performance, to be honest,” he continued. “I thought we were a little bit tentative and nervous in possession. We were getting possession turned over, at times, and that was disappointing because it’s something we’re normally very good at.

“That allowed them to break on us and meant we couldn’t build any momentum. Having said that, we still managed to create a number of good opportunities. Overall it was a great day, and it’s the players who deserve huge credit for that.

“I’m delighted for our supporters because they really got behind the team. When you come to this stadium and our supporters are behind us it’s a terrific atmosphere. It certainly pushed the players on.

“I asked in the week for the fans to get behind the players during the 90 minutes, and save their grumbles for me at the end, and they did that. I’m just delighted they didn’t have any complaints at the end!

“Thankfully we got the result which meant they didn’t get at me at the end. The supporters were terrific, they really got behind the team in what wasn’t an easy game. I was so proud of my players and you can’t ask for any more than that as a manager.”

“We lost our way a little bit in the first half, we didn’t get pressure at the right moments and we kept turning the ball over when we’re normally very good at keeping it. That was our big problem.

“The biggest thing after that was the reaction at half time and getting the three points. We knew that three points at this stage of the season was crucial. I do believe if we hadn’t got those three points it would have been a long way back for us.

“Not only in terms of the points, but the psychological effect it would have had. It’s amazing what 45 minutes can do in football, it can reignite your season, and it’s certainly done that for us from this game.”

The task was made harder for the Blues moments before half time when Mike Jones received what appeared to be a harsh second yellow card which, of course, reduced the team to ten men for the second 45 minutes.

“For the second booking Mike picked up, I thought he did everything in his power to try and get out of the way of the challenge,” he said. “If there was contact, then in my opinion it was not intentional contact, but I’d have to watch it back again. All I know is that there was no intent, he was trying to back out of the challenge.

“We’re all human so to go in a goal down and a man down at half time wasn’t ideal for anybody. I’ve been there before, and it isn’t easy. We all work hard at trying to do the right things but everybody has their doubts. When you prepare and go about things in the manner that we do, it’s really disappointing when things don’t quite happen.

“I spoke to Tommy [Wright] at half time very calmly about the substitutions we could make and how we could go about the second half. We took ourselves away into a room on our own so that we could take some clear-thinking time.

“We knew it was a game we still had to win. You can approach it by trying to shut up shop and try to get the best you can out of it, but we needed to win. It was important that we kept the likes of Devitt on the pitch who can make a difference, and that was the same with Hope and Thomas.

“After we’d discussed our options we fed that information to the players. As I’ve said to the lads on many occasions, the tactical elements only allow you to go about the game in a cohesive manner. The real winning of the game comes from the mentality and the desire to do the other aspects of the game.” 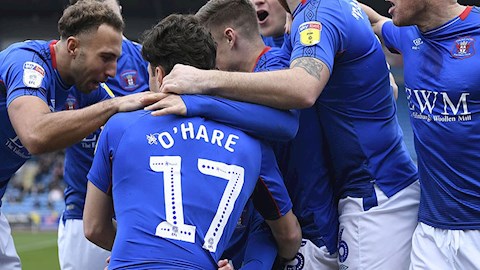 On the importance of adopting a calm approach during that half time break, he told us: “Half time was important in terms of there was a little bit of calmness needed. Sometimes when you’re a young manager you can go in there and tear the paint off the wall, but it possibly isn’t what’s necessarily called for.

“There was a measured approach required, and a little bit of understanding of what was needed in the second half. As well as that, we tried to install a little bit of belief into the players. I thought they responded brilliantly - to a man.

“I know we rode our luck a number of times and Adam Collin made some incredible saves. If you’re going to win a game when you’re 2-1 down, and a man down as well as having to take some risks to get a result, you need a little bit of luck. I don’t think we’ve had that in recent weeks, but I thought we got it in this game. You tend to get that luck when you work as hard as we did.

“We changed the system at half time and went to a 4-4-1, and we had to spring from those positions. I thought we did that really well, and I was delighted for H [Hallam Hope] to get his goal in the end. I thought he led the line brilliantly in the second half and a couple of his movements to create chances were fantastic.

“I was disappointed for him that he didn’t manage to finish them, but he got his goal in the end. I’m also pleased for Simmo [Connor Simpson] that he came on and contributed to the goal, which was really pleasing.”

“We’ve put ourselves back in there, and now we can’t let it go. We’ve been talking about must-win games, and now the next game is a must-win game again. We’ll enjoy this, I’m going home on the train very shortly and I’ll have a couple of glasses of wine, but then I’ll be back to it tomorrow and ready to go again.

“I’m determined that we’ll find a way to get into the play-offs and now we have to keep pushing. We can’t rest on any laurels. We have to push again because next Saturday is now a must-win game.

“There’s still everything to play for, we can’t let our efforts in this game be for nothing. We must ensure that we follow this up next week with another performance and another win.”