United boss Steven Pressley spoke about the importance of this weekend’s home game against Crawley as the Blues head into a massive final fortnight of the campaign. 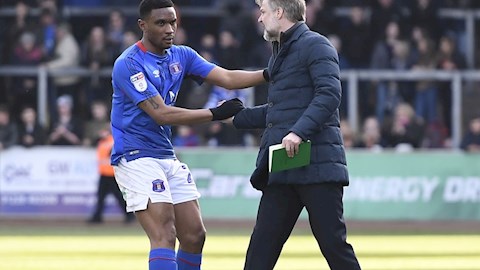 MANAGER: A huge hammer blow for the player

“My focus is still very much on the remaining two games of the season,” he said. “In our last two home games we’ve beaten two sides at the top of the table, and performed very well in those games, and we have to go into Saturday’s game with a real intent and optimism.

“The least we must do is take it to the final game of the season. As this club has experienced in the past, anything can happen if you take it to the last game, even goalkeepers scoring goals! We have to at least take it to that point.”

“There are many clubs who are inconsistent at the moment,” he continued. “Us losing on Monday after beating the top of the table team on Friday was followed on by a number of other clubs who are competing for the play-off places also losing.

“That’s why it’s so important that we focus on taking care of our own situation with just two games to go. Nobody is showing any consistency or really claiming that final play-off place, so without doubt if we take six points from six we still have a chance.

“If we were to win both games we’d have a real opportunity, but as yet we’re not demonstrating that. We’re demonstrating the ability to win one game then follow it up with an inconsistent performance. For us to win the two games we have to show a change to our current form, but we are definitely capable of that.”

“We’ve approached all our games to win, so the situation we’re in won’t change that,” he commented. “In terms of our personnel, we haven’t got a great deal of depth in the squad at this moment in time, so to make changes isn’t possible for us.

“Like I said on Monday after the game, the application from the players wasn’t the issue. I thought they looked a little fatigued from the efforts of Friday, but in terms of our application we went about it in the correct manner. We just lacked that quality, and I don’t know if that was due to the fatigue.

“When I came off the pitch on Monday, if you’d asked me how I’d thought other results had gone I would have told you that I thought that would be the end of our chance to get into the play-offs. When I got into the dressing room and looked at the results all of a sudden we’re talking about us still having an outside chance of getting in there. I still have that feeling that we’re going to do it, I really do.” 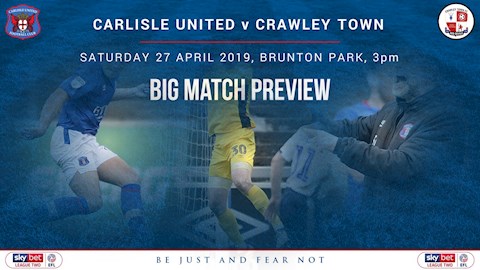 And on the importance of the Crawley fixture, he told us: “Saturday is a big game, but no bigger than any of the others. We’ve worked hard again on how we’re going to go about it and we’re going to go into it with real intent.

“There is no slacking off, we are 100% focused on the weekend. It’s our last league game of the season at Brunton Park so we want to put on a good spectacle and leave good memories here going into the summer. We obviously hope it won’t be our last game, because we’ve got a play-off game to look forward to, but either way we want to end the season on a high note.

But will the fact that Crawley have secured league safety change things?

“Although Crawley are safe, and people will look at it as them having nothing to play for, in football if you’re a good professional you have a level of pride in every aspect of your performance,” he said.

“You should have pride every time you take to the training field and want to be the best, so if you’re a good professional you want to do well, so there is no game without something to play for.

“They’re unbeaten in their last three. Their most consistent formation has been a 3-5-2, but they’ve also played a 4-1-4-,  so we’re a little unsure as to what they’ll definitely play. They had a great result at Exeter playing 3-5-2 then got a draw at home on Monday playing 4-1-4-1, but regardless of that they’re a team with good ability with some dangerous players. They’re a good side and we know it will be a challenge.

“What we want is that we’ve got to make sure we go down to Yeovil with something to play for. We should take a lot of encouragement from our recent performances at home. We have to keep that going and make sure we bounce back from Monday’s disappointment so we go to Yeovil on the last game of the season with at least an opportunity.”

“That’s the professionalism I demand from my players and if I’m going to demand that from the players I have to be an example.

“I’ll be speaking to the players regarding contracts after the last game of the season about their futures. I’ve got the decisions clear in my mind in terms of the personnel. We’ve had a rollercoaster season which hasn’t been good in terms of results, but it has meant that I’ve been able to see how people adapt to disappointment and adversity which are often really important factors when you come to deciding on players. It has allowed me to assess players and see their character.

“I understand the concerns about Jamie Devitt, but the problem is if you go and speak to one player you can’t then not speak to others. There’s got to be a consistency to what you do.

“We’re in a situation where we’re going for the play-offs, so if you start telling people and letting certain players down, and giving others good news, then you end up with a fragmented dressing room. I’ve tried to be consistent and keep the focus away from that, and we’ll speak to everybody once we’re clear on our future.”