United boss Steven Pressley spoke more about areas to be improved following the disappointing weekend away performance at Stevenage. 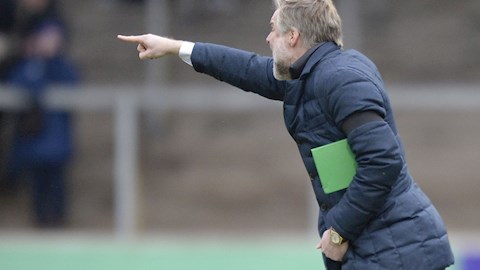 MANAGER: We have to look to finish the season well

“I said this after the game, but we live in a world where we watch people analyse the tactical elements of Premier League games all the time,” he said. “I’ve reminded our players that in League Two the tactics are important to a degree, but winning your personal battles and earning the right to play football is the most important component.

“Unfortunately, we didn’t manage to do that on Saturday. Physically we weren’t quite strong enough, we didn’t stand up to their size and physicality, and that was a real learning curve for some of our players.

“We worked hard on that aspect through the week leading up the game but I know that we aren’t the biggest of sides at this moment in time. We’re lacking a bit of size and also a little bit of steel in the team.

“We also don’t have a lot of leaders in the team at this moment in time, and I think we desperately need that. When you play in League Two, you do not win any games if you cannot handle the physical aspect and the basics of the game.”

And that lack of physicality led to two goals being conceded from set pieces, an area which has been costly, of late.

“We gave up another two key moments from set pieces and that is costing us,” he agreed. “The goal in the early part of the second half come directly from a corner again.

“We go man-to-man so it comes down to a player not picking up their man, which they must take that responsibility on. The third goal comes from a second phase set play, and we then give the penalty away.

“We have to do better, and set pieces are a real Achilles heel for us at this moment in time. Part of that is that I don’t feel we’re carrying a great deal of strength and physical presence, and it’s something we definitely need to improve on.”

“I understand the weaknesses of us, and I understand our deficiencies,” he confirmed. “We can only work really hard to try and eradicate them. The players have to take that responsibility onto the field and understand they have to carry out their jobs at key moments.

“The other disappointment was that we didn’t manage to carve out the opportunities that we hoped we would at the other end. We went for quite an attacking team, and one that I thought would cause them problems, but their strength at times didn’t allow us to build any sustained attacks.”

“We’re now four points away from the play-offs, so we know it will be difficult, but we can’t give up hope,” he insisted. “We’ve got four cup finals and we have to believe we can still sneak in there. If we take 12 points from four games I think we will sneak in there.

“We lost some ground but it doesn’t mean we give up hope. We have to keep working hard, keep believing and keep trying to do the things to ensure we pick up points between now and the end of the season.

“We cannot throw the towel in. We must keep looking to get the 12 points between now and the end of the season. We know Lincoln will be a tough game. They’ll be coming to us looking to secure the title, but we have to ensure we’re the team who stops them from doing that.

“There’s nothing worse than seeing another side celebrate at your own stadium and I don’t want to be involved in that on Friday. I want us to do our jobs for our needs and I’m looking to us to win that game well.”

With his own future still to be determined, we wondered if any talks had taken place as the end of the season creeps ever closer.

“There’s been nothing yet but, when the time is right, I’ll have a chat with David [Holdsworth] and the board about the situation,” he said. “I’ve said this before, but this is a club I like, and I honestly feel there are significant things we could achieve here.

“I think there are a number of factors which will determine what happens. I don’t think it’s fully reliant on league position, or whether or not we finish in the top seven. It will be based on a number of aspects.

“The work we’re doing, the way we go about things, our plans for the future and the structure we see for the football aspects of the club are all important areas for consideration. There are things within the football side that need a shake, and which need to be improved, but I’m very optimistic about what I think this club can achieve.

“I accept that this is a tough period, but I’d love to have the opportunity to take this club through the leagues. There are some terrific people at this club, and they all crave for success, and with some improvements in place I think we’d see a significantly better team.

“That takes time, but I genuinely would see it as a fantastic honour if I was able to take that job forward.”