United boss Steven Pressley spoke to us about what will be another tough game as the Blues get ready to take on fellow play-off chasers Stevenage this weekend. 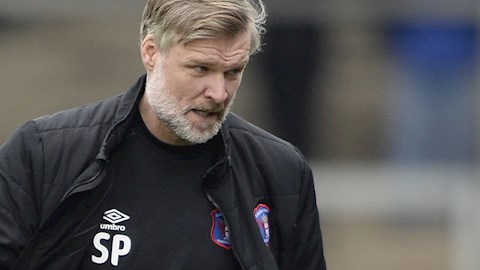 MANAGER: It has to be a balancing act

“They’re a team, like ourselves, who are on the back of a really good result,” he said. “I’ve watched their Grimsby performance and that was strong. They’re a big team, they’re aggressive and they’re very well organised.

“This is a good challenge for us and it’s one where we have to be ready to stand up to the game. If we’re not ready for it, we’ll fall flat on our face. One of the things Stevenage have is a real physical presence and that’s something we have to do deal with.”

“This game is an important one for both teams,” he added. “They will still believe they have a chance of sneaking into the play-offs, so it makes for an interesting encounter.

“I’ve told the players that this is a really significant game in terms of what we want to achieve. That’s why we’re determined to go there and get a result.”

Looking back to the positive impact last weekend’s result could have on the dressing room, he commented: “A result like the Bury one will always make the week leading up to the next game far more enjoyable.

“Winning games breeds confidence which you hope, in turn, breeds momentum. In terms of what that win will do for the momentum, I can only answer that after Saturday’s game. Ultimately it will all be defined by results.

“If you think back, we had a really positive result against Swindon, but we followed that up with disappointment, so we’ve got to get our mentality right. I’ve said a number of times now that promotion and these types of opportunities don’t arise that often. You think they do, but they don’t, so you have to grasp them.

“We’re at the stage of the season where all games are big games, whoever you play. You saw with the results on Tuesday, and in recent weeks, that there are a lot of inconsistencies in a number of teams at the moment. I think that comes down to so many teams fighting for their lives, at both ends of the table, and reality sometimes sets in with certain teams at this stage of the season.”

“That’s why there isn’t an easy game in any league at this moment in time,” he continued. “I said this a few weeks ago, but that’s why the English leagues are so special.

“There are so many teams who believe they can still achieve promotion, and there are a number of teams who are fighting to avoid relegation. It makes all games at this stage of the season very difficult games, and I think that’s reflected in the results of late.

“With the exception of probably only Lincoln, most teams have shown a real inconsistency at this time of year. Stevenage are one of those, as is every team in the league. Apart from Lincoln, nobody has shown that absolute consistency over a long period.

“Moving forward, consistency is one of the things we have to improve on. If you can show that consistency you’ve got a real chance in this division. It’s easy to look at things on paper and think a certain game should be easier or more difficult than another.

“If you look back at our last few games, Bury was probably the most difficult one on paper and it’s the one we won. That’s why you just have to concentrate on the next game, and that’s what we’ll be doing this week.”

And on the part the fans can play, he said: “It was great to see them get behind their team last Saturday. All I can ask is that they really support their players.

“The lads are working hard and they need the support they’re getting from our fans because it makes a huge difference to them. I’ve been disappointed, frustrated, annoyed with aspects of our defending, all of these things, as have the fans, but I haven’t seen anything that suggests these players don’t want to fight for this football club. I think we’ve got a good group in that way.

“It goes without saying that I want a good relationship with our supporters. Relationships in all walks of life are never built overnight. They’re built over a period of time. I hope that my time here, if it goes beyond the summer, is a period where I can build strong relationships.

“I hope the fans will really grow to enjoy my managerial style. I’m a manager of huge passion and huge determination and I want to bring real success to this club. I dearly hope I can build a great bond with them. I’ve done that at a number of clubs I’ve been at and, like I say, hopefully Carlisle will be one I’ll be adding to that.”