Popular midfielder Mike Jones notched his first league goal in 92 league outings for the club, but it proved to be one of the most important strikes of the season so far as it helped the Blues to three points against league leaders Lincoln City and, more importantly, put them right back in touch with the play-off race. 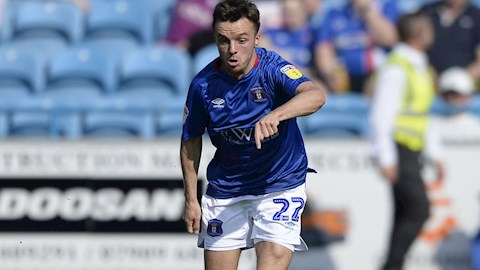 INTERVIEW: It makes us believe again

Speaking about the match winner on Friday evening, he said: “I just never score here … never. To get it at a time when we really needed it is an unbelievable feeling. I’m buzzing, but the bigger picture is that we got the win and it keeps the dream alive.

“Forest Green and Exeter still need to play each other so it feels like it’s back in our hands a little bit, because this could open up an opportunity for us. That’s why this game was do or bust, really, and we’ve kept it alive, but we know we still probably need to win all three of the remaining games.

“Possibly seven points would do it, but we can’t think that way, we just need to carry it on and get a bit of momentum.”

“We need to win at Grimsby to make sure we back this one up,” he added. “If we look at Lincoln, they’re not anything glamourous on the eye, but they’re top of the league because they’re organised and efficient.

“Sometimes it doesn’t take much to get out of this league, and maybe we’ve been too good on the eye sometimes without that real edge of ruthlessness. Like I say we’ve done what we needed to do and if we carry it on at Grimsby, well, who knows.”

On the confidence the group will take from the result, he said: “We went into the game thinking it was our last chance, but now we’ve got the result we have to do the same on Monday.

“If we win these three games we’ll be going into the play-offs with other teams thinking they really don’t want to play us, so it’ll be good if we can achieve it.

“I’m pleased with how I played alongside Kelvin as well. Keith [Curle] brought Kel in to play beside me but we’ve never really had a game where it’s went well for us when we were both in the middle.

“This one felt really good, it felt like we had a nice balance in there. One went and got it and the other went away, we backed each other up, and he’s a good pal of mine as well. We both said afterwards how nice it felt because it’s been a long time coming.”

Taking him back to the subject of his first league goal for the club, he explained: “I actually had a chance to shoot from a similar position a couple of minutes earlier, and I probably should have, to be honest.

“It was Scougs or Cal who made a last-minute run, so I went for the pass, and their right back cut it out. I had quite a bit of time the second time around so I just went for it. It was a nice feeling of relief when it went in.

“With goals in general, I can’t believe I haven’t scored more. I used to score regularly before I came here, believe it or not. It’s one of those rots that has dragged on for whatever reason.

“I’ve hit some good shots this year and keepers have made saves, or I’ve hit the post, but sometimes it’s the ugly ones which go in. The lads have been giving me a bit of stick about scuffing it, but I’ll take any goal, however it comes.

“There are so many ups and downs in football so all you can do is enjoy moments like that. I keep saying it, but the bigger picture now is that we must back it up. It all counts for nothing if we don’t get into the play-offs.”

The jubilation of the 76th minute volley provided a stark contrast to his last home game, against Bury, where two bookings led to a sending off and a real feeling of despair as he trudged down the tunnel.

“It’s nice to give something back to the lads after what happened in the last home game, because I was gutted,” he revealed. “I’d got back into the team and I felt like I was doing well, so it really felt like I’d let them down.

“They showed great character to come back and win against Bury, so it’s nice to play my part with this goal against Lincoln.

“Looking back at that sending off I knew at the time, when the ref blew his whistle, that it was a second yellow. Sometimes in life you just feel like everything is going against you. It’s like God doesn’t let you be too high for too long, if you know what I mean?

“I was back in the team, I was doing well, then … bosh! You come crashing back down and it was like, right, here we go again, I’ve got to pick myself up again.

“I’d like to think that one of my qualities is that I’m mentally strong and I always feel like I can come back, but it doesn’t feel too great at the time.”

“Also in the background, my personal circumstances in the last year with my little boy have been difficult,” he said. “I’m having to fight and scrap to get see him and there’s a lot of travelling back and forward to Sheffield, where he lives now.

“Not many people know that I’m a pretty good Catholic … although I’ve just had chicken, so my mum is going to kill me! I completely forgot, I was starving, so that’s not great.

“With my faith, at this level there can be a lot of down moments, so when you do get days like this you’ve just got to take a minute and think that sometimes it’s all worth it, just for how good it feels when something like scoring the winner for the lads and keeping the dreams alive happens.” 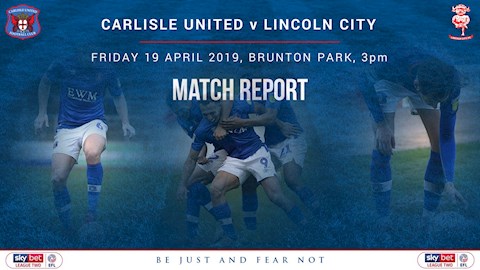 And he revealed that the goal was also for his mum and dad, who had last been at Brunton Park for the Bury game two weeks ago.

“It was incredible for me to score because I had my mum and dad here, and I owed them that,” he commented. “They haven’t been to many this year, because I’ve been injured and in and out of the team.

“They came to the Bury game, but that didn’t go to plan, so my mum sent me a bit of an ultimatum message before the Lincoln game. It’s really nice for them to see me score and us win because they’ve been great support, but it’s been that way with them since I was 16 and I started off on my career.

“It would have been nice if my little boy was here, but I’m going to try to get him to the last game, so it looks like I’m going to have to score another.”

As well as the family support was the noisy backing from the fans on Saturday as they also celebrated the welcome victory.

“You know me now, I’ve always spoken well about the fans, and this club is crying out for being in the league above, as a minimum,” he said. “I’ve absolutely tried, and the lads and staff are grafting so hard to be up there and achieving the goal of getting this club back into League One.

“They’ve been brilliant, and if they can just stick with us and give us the same support for the last three games then it makes a massive difference. The lads really appreciate it.

“We have one of the best supports in the league, if not the best, and it’s just a thank you to them for what they do.”