Carlisle United are delighted to announce that Steven Pressley has this morning signed a one-year deal which keeps him as manager of the club for the 2019/20 season.

Pressley, 45, took post with the Blues on a half-season contract midway through January this year and has impressed everybody at the club with his manner and approach through his near 14 weeks in the Brunton Park hotseat.

Chairman Andrew Jenkins said: “Steven has a very calm, diligent and methodical managerial style and he has demonstrated an excellent work ethic since joining us in January.

“He’s enjoying working at the club and he really has taken Carlisle United and Cumbria to his heart. When talking to him you can see instantly that he’s desperate to bring the success he feels the club deserves.

“We’ve watched him closely over the past few months and we’ve seen a manager who has a clear vision of what he wants to achieve. He’s already faced some difficult challenges but, despite that, he’s kept a level head and a real focus on where he feels things can be improved.

“We’re delighted that he’ll be staying with us and, as we saw on Friday, when he has the players at his disposal he employs an exciting brand of attacking football. With three big games to go we all genuinely hope that Steven will be starting his first full season with us in League One.

“Whatever happens we feel this is an exciting appointment and we’re looking forward to seeing him really stamp his mark and help us to move the club forward.”

Director of football David Holdsworth said: “We’re pleased that Steven has extended his contract for a further season.

“He’s demonstrated in recent weeks that he can deal with a range of issues in a measured and level-headed manner and he’s worked very hard within the football department to raise standards in every area.

“He has shown a real commitment to Carlisle and to the football club, which has impressed everybody. Every spare minute is given to team matters and that comes from having a drive and determination to make this club and his team the best it can be.

“With injuries and suspensions, and things like that, it certainly hasn’t been an easy ride for him. From that the results haven’t always been what Steven wanted, but the players have responded and, with two wins from the last three games against teams at the top of the division, we’ve seen a glimpse of the direction we want this club to go.”

“I work very closely with Steven and I know that he recognises what it needs to get the formula right at this club,” he added. “We’re already looking at what we want to do with the squad in the summer so that he gets the players who can play the game in the way he wants it to be played.

“He has the full backing of the board in what he wants to achieve and, looking shorter term, we know we have three massive games ahead of us. The fans were behind us with every kick of the ball against Lincoln and, again, that shows the real desire for success which is evident with everything and everyone connected with this club.

“We’re at a stage where we want stability, so we can start to plan properly, and we feel Steven has the skills required of a very good manager. We’re looking forward to working with him and to supporting him as we look to push this club on to where we all feel it should be.”

The former-Scotland international played 32 games for his country, breaking a 91-year-old record at Hearts into the bargain when he surpassed Bobby Walker’s 29 international appearances whilst at the club.

Pressley took his first step into management with Hearts at the end of the 2004/05 season when he became joint caretaker manager for the final two games of that SPL campaign.

At just 30-years old he joined George Burley as assistant manager with the Scotland national team, and left that post in September 2009 at the end of the World Cup qualifying campaign.

Having retired as a player, he was appointed assistant manager at Falkirk at the end of summer that same year, and took over from Eddie May in the hotseat in February the following the year.

He was in charge for 138 games with The Bairns, but moved south of the border to take the Coventry City position which had been vacated by Mark Robins in March 2013. It was a turbulent time as the club was docked points and forced to play home games at Sixfields in Northampton, with off-field matters plaguing the outfit at almost every turn.

He left Coventry in 2015, having managed there for 100 games, and worked with Southampton as a scout, before replacing Graham Alexander as manager of Fleetwood Town. He moved on from Highbury 12-months later and has since had a spell with Pafos, in the Cypriot first division.

His distinguished playing career saw him start with Glasgow giants Rangers, who had spotted him playing for the Inverkeithing Boys Club, and he picked up a Scottish Cup winner’s medal having come off the bench during the ‘Gers victory over Aberdeen.

He joined Coventry City in 1994 and moved back to his native Scotland one year later, where he signed for Dundee United. Three seasons and 100 appearances followed for the Tangerines before he made the switch to Hearts, where he established himself as club captain and a real favourite with the fans.

European competition and more cup success came at Tynecastle, and he also took the role of club spokesman through a difficult and controversial spell of ownership for the Jam Tarts.

He crossed the Old Firm divide in 2006 and became the first player to win the Scottish Cup with three different clubs when the Hoops beat Dunfermline in the final. Short spells with Randers [in Denmark] and Falkirk followed, before he made the step up to manage The Bairns on a full-time basis. 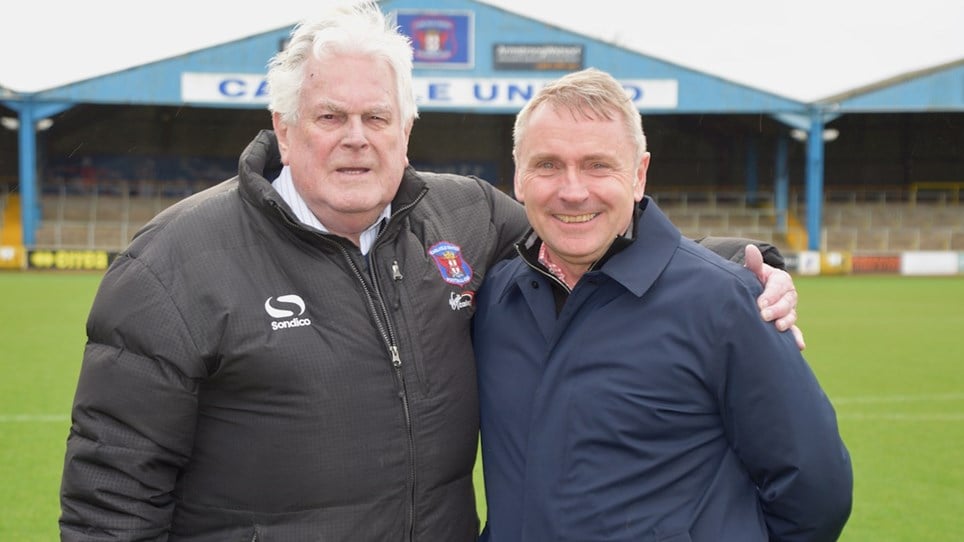