United boss John Sheridan spoke to us about this weekend’s trip to Macclesfield at his Thursday afternoon press conference. 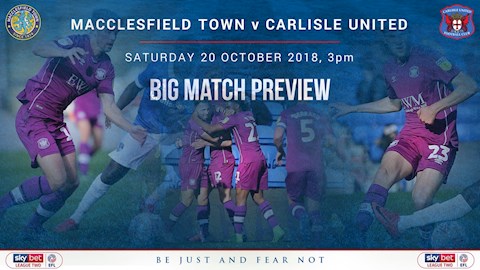 BIG MATCH PREVIEW: A look ahead to the weekend away game

“We’ve had the disappointment of last week and now it’s time to move on,” he said. “Our away form has been good so we’re going into this weekend’s game believing we can win it.

“Hopefully we will, because if you aren’t winning at home you have to pick up points when you do go away. It’s usually the other way around, but we have to take the positives and make sure we keep trying to improve in every area.”

“It’s the first of two tough games on the road, but we don’t mind that,” he continued. “Like I’ve said before, we go into every game believing we can win, and that won’t change wherever we go.

“Macclesfield aren’t winning games, but they’ve given some good teams a tough test. I know Danny Whitaker well, he was an excellent player when he played under me, and I have a lot of time for him.

“The manager role is new for him and it’s a test, but they’re fighting for their lives and they won’t make it easy. With the results they’ve had they could easily have had another eight or nine points with the way they’ve played - they wouldn’t be where they are now if that happened.

“In most of their games they’re only losing by the odd goal, so we have to be ready for that. Danny will have them upbeat and positive, but we go there in the same frame of mind.”

On getting last weekend’s disappointment out of the system, he commented: “We’ve had meetings and chats this week because we do want to sort our home form out.

“It was open, everyone spoke and said their bit, and it was good. As a manager, it’s down to me to help with that by looking at whether or not we’re playing the right formation, and how we can turn the good chances we create into goals. The story of our home form hasn’t been a lack of chances, it’s been about not taking the very good opportunities we’ve created.

“Something else I keep repeating is that the most consistent team will get out of this league. We haven’t found that yet, but we’re working away at making it happen. We’re still in touch in what is a tight division, and we maybe need to learn that when a game is tight, keep it that way. You do that by staying solid and by not making too many bad decisions in bad areas.”

With three consecutive away wins under the belt, he also spoke about the desire within the squad to keep that going, with the trip to Moss Rose closely followed by Tuesday night’s game at Sincil Bank.

“I know if we perform, and do what we do well on the day, we’ll be a match for any team in the division,” he said. “We don’t disrespect Macclesfield because they aren’t winning games, because we know they can play some good football as well.

“I’ve got to try to get the best out of the team every week, and that means finding a way for us to be consistent. If that means using a different formation to get us results, I’m not frightened of changing it.

“We’ve won six and lost six and that isn’t good enough to get you promoted. We’re still in the mix despite that, so there’s something there to go for if we can get our act together. These two games are against the team who are bottom and the team who are top. That makes little difference because it’s about who does the simple things well. If we don’t, we’ll cause ourselves problems, and I don’t want to see that.”

With an update from the treatment room, he told us: “I don’t think Danny Grainger or Jamie Devitt will be ready for Saturday, but it’s good to see them back out on the training pitch and running again.

“There are one or two niggles but, as ever I’ll be concentrating on what I do have available, because they’re the ones who can get us a result.”

Another excellent piece of news emerged from the press conference when the manager confirmed that first year left-footed winger Charlie Birch – son of former-Blue and current academy coach Mark Birch – had trained with the first team following his excellent performance in Monday’s Cumberland Cup win over Workington.

“I want to give a bit of belief to the younger players that there’s an opportunity to get in the team, and Liam [McCarron] is a good example of that,” he explained. “He’s shown us that he can cope with a first team environment, but he knows he still has a lot to learn as well.

“Charlie Birch trained with us this morning [Thursday] and he’ll probably be in the squad for the weekend. That comes from what he did on Monday night against Workington because he didn’t do himself any harm at all.

“When the first team squad has one or two injuries it helps the younger players as well, because it gives them a chance to show people what they’re about. From that we get the chance to take a closer look at them and they tend to learn a lot from it, because they’re playing with better players.

“Young Charlie trained with us, but I actually don’t think he got a kick of the ball. I’ve just spoken to him because he was running around and turning up as a centre forward, then as a right winger, when he doesn’t need to do that.

“I reminded him that all he needs to do is keep his position and play to his strengths. He won’t impress anyone by just running everywhere, because it means you end up not contributing as much. The lad is a good player and that’s why he’s involved and in the squad for Saturday.”

“There’s good energy and desire about him and he’s a player who wants to be better,” he added. “I think he believes he has a chance, and there’s a bit of an edge about him when he’s out on the pitch, which I like. That will stand him in good stead. Hopefully he’ll settle quickly because he’s going to have to.

“It’s a long, long road to being involved regularly and it isn’t just about having talent. It’s about doing things properly and working hard. The coaching staff here are going to help these young lads if they start to show that they have a bit of hunger and hopefully it will work out well for all of us. They’re all local lads, so it won’t do the club any harm at all.”