United boss John Sheridan gave us his reaction to the 3-1 away win at Oldham shortly after full time at Boundary Park on Saturday afternoon.

“I thought we played well, particularly up to scoring the third goal,” he said. “We were very good in the first half, we played well on the counter, and the goal we got was a very good goal. 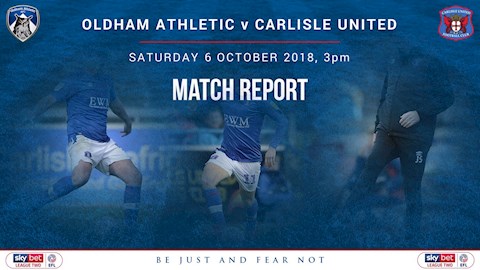 MATCH REPORT: A report from the away game at Boundary Park

“We had other chances to score more, but that doesn’t take away from us being magnificent for most of that game. The thing we did right was that we took our chances. We’ve had similar performances recently where we haven’t scored goals, so it was nice to add that to our game this time.”

“This is a tough place to come,” he added. “Oldham are a decent team when you let them play and pass the ball, but we worked hard to stifle that, and we did it well. We kept going up front, and we got an advantage in the game when Hallam Hope scored, and that led on to us making it look more comfortable.

“The two second half goals were excellent, with only a minute or two between them, and that gave us breathing space to really get into our game. Obviously I would have liked to have kept a clean sheet, but they’re a team who have scored a lot of late goals, so they do keep going and getting at teams.”

“In this division, as we’ve seen a few times ourselves this season, the first goal can make a big difference,” he commented. “If it goes against you, heads go down a little bit, and on the other side of it if you score first you give yourselves a great chance of going on to win the game.

“To be fair to the lads, I thought we were comfortable all game. Adam [Collin] made a good save at 3-1 but you always expect the home team to get chances. Sometimes, with a three goal lead, you can take the foot off the pedal, but we reacted to the setback of letting them score by picking up and playing well again.” 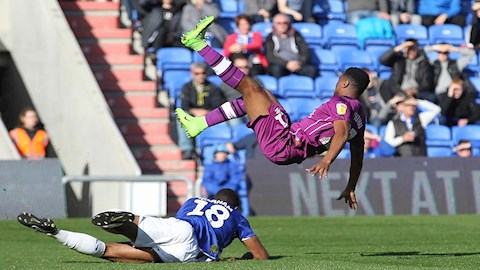 GALLERY: The action from the Oldham away game

Speaking about the spell just before the Oldham goal, which saw the Latics goa for a change of approach, he said: “They changed the system they were playing to 4-4-2, so we changed ours to counter that ... and that was probably a mistake of mine. I shouldn’t have tried to be clever, because everyone knew the jobs they’d been asked to do, so I should have left it.

“We conceded after I changed it, so when you look at the way we were playing, and the good shape we had, having matched them with a 3-5-2, I should have kept with what we were doing. That’s exactly what I’d told the lads at half time – just carry on with what you’re doing.

“I didn’t feel we were under any pressure at all, with the only criticism that we could have been using the ball better higher up the pitch. Decision making meant we didn’t add to the goals in the first half, having had one or two opportunities to do that.

“There was the ball which flew across the box and Hallam was clean through, but I think it was George Edmundson who made a great last-dich tackle to stop that one. Other than the saves at the end I don’t think Adam [Collin] had too much to do in reply.”

On what three goals will do for confidence for the team, and for the individuals who scored them, he said: “I’m pleased for whoever scores. Jack Sowerby has had chances recently, and he’s off the mark, but it’s brilliant for Hallam and Ash Nadesan as well.

“We’re a team, we do things together, and the work ethic is fantastic, so it’s good for any of them to score. We work our socks off, we do the hard stuff as a team, and that’s what we’ve been trying to get into them from day one.

“Defensively I also think we look solid. I’ve been looking at things, and analysing what we’re doing, and the problem is that we haven’t been scoring enough goals. At the back we’ve been a good unit because we’ve only conceded 10 goals in the last 10 games. That’s not a bad record, so if we do keep getting them at the other end we’ll be doing well.”

United’s win at Oldham made it a very creditable third consecutive away victory, and the manager insisted that improvement on the home front was also not too far away.

“I don’t think we’re playing too badly at home,” he said. “We could have had possibly six points from recent home games, and we’d be in a really healthy position if we’d done that, so I really am pleased with the way we’re playing.

“The biggest downer for me has been us not taking our chances. If you take them we all know things turn out differently. We took them against Oldham and, with our supporters being behind the goal, it’s always a good feeling.

“I thought the fans were magnificent. You could tell they enjoyed it, it was another big following, and it’s always nice to send them away smiling.”

And on picking up the points at a club where he has so many close ties, he told us: “I have really good memories of being at Oldham, I have a lot of fondness for the club, but my priority is always about getting three points for Carlisle United.

“It doesn’t really matter to me where we go, I just want to win. It is nice to come back and beat Oldham, and they had a few players playing in the game who I actually signed. They’re great lads and they’re a team who will be involved, but I’ll keep saying that the only team that matters to me is Carlisle. I want wins for us, whoever we’re up against.

“We’re back on the winning trail and we want to be involved at the top end, so that’s why the result was important to us. The aim now is to put another little run together. It’s still really tight up at the top so we know we need to keep picking up the results.

“This win helps, and the players need to be applauded because it’s a brilliant response to the two home defeats. They’ve done what we asked them to do and full credit to them for that.”