United boss John Sheridan gave us his reaction to the 2-2 away draw at Lincoln shortly after full time on Tuesday night. 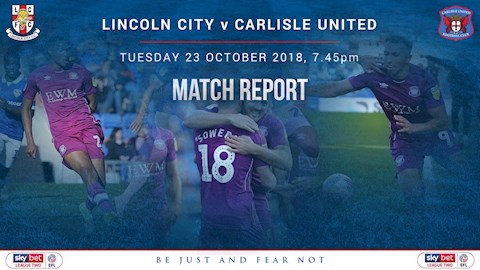 MATCH REPORT: A review of the Tuesday night away game

“The lads deserve my praise tonight,” he said. “I’ll applaud them with the way they went about the game. We knew we’d have to defend because of the way they play, they’re very direct, they get the ball in the box and you have to work hard and pick scraps up.

“I thought we went about our jobs really well, and I’m chuffed to bits with the response from the players.”

On his team selection, he added: “People probably thought I was going mad when they looked at the team I’d picked, but we are short on numbers. We’ve played a few square pegs in round holes tonight, but it was a brilliant effort from all of the players and I’m chuffed to bits for them.

“They’ve taken Saturday on the chin, and sometimes I’ve just got to be straight with them. We should be doing a lot better than we are with what we’ve got. We were short tonight, but players have come in and performed and, from 1 to 11, I thought we were brilliant.

“Lincoln are going well and they’re very hard to play against. The players did everything I asked of them, and we ended up getting something from the game. I left it late to tell the lads the formation because I didn’t want to worry them too much.

“Sowerby hasn’t played much at right back and Richie Bennett has never played at centre back. I didn’t want to frighten them by working on the shape. I thought it was a good game for us on the back of the Macclesfield defeat, because we were coming here with nothing to lose, because no one really expected us to get anything.”

And expanding more on the decision to use striker Richie Bennett at the heart of the back line, he commented: “We knew plenty of balls would be coming into the box, so I thought I would put Benno back there, and I don’t think he let himself down at all.

“He was excellent, it’s all new to him, and he made one or two little mistakes, but that’s part and parcel of playing in a strange position. He did what he had to do and I was chuffed with the way he played. He looked like Bobby Moore at times! Sowerby did well against a good player tonight as well, he stuck to his task against a tricky player. I’m pleased for both of them.”

With United having forced the pace in the first half, he said: “It was a bit of a shame we didn’t go into half time 2-1 up.

“I would have liked to have come out for the second half with the advantage. Our first goal was an excellent passage of play, it was great awareness from Adam [Campbell] and a great finish from Ash [Nadesan].

“On the flip side, we should be doing better in midfield for their goals, it’s about being on the front foot. The second goal is a mistake from Adam [Collin] which he’s held his hands up to, but he’s made a great save in the second half to keep us in the game.

“We’ve come to a tough place and picked a point up after the run we’ve been on, and if we’re being greedy we would have liked all three points. We worked really hard, we kept the discipline in the team, and players who haven’t played a lot of games like Regan [Slater] and Adam [Campbell] have come in and done well.

“I told Regan I thought he should have done better with the first goal, rather than take a step back he should be stepping forward to put pressure on the ball. He’s a little tiger and I love him as a lad, he’s got a lot of good things in his game, and I think he’ll go a long way. I thought he got stronger as the game went on, he’s still a baby and he’s played in a tough game tonight.”

“Overall we’ve put in a workmanlike performance, which is pleasing after Saturday,” he continued. “I don’t think we played really well, and I would have liked us to have kept the ball a bit better.

“We maybe could have nicked it in the second half, but you’ve always got to be wary in games like this. It comes down to final decisions and that little bit of cuteness. We defended when we had to as well, and they had the chance where their lad lobbed Adam [Collin] at the end. Everyone knew what their job was, we defended well, and we were very hard to beat.

“We’ve ended up taking a point home and we’ve got to try and go on a little run now to get back in the mix. There are one or two teams getting away from us a little bit so we want to pick up points which will enable us to catch them up.”

When asked if the performance was a response to some strong post-match words following on from the Macclesfield game, he commented: “I don’t want to be talking after games about us not playing well, it’s not a criticism, I just expect better because we’ve got better players.

“We should be in the top six with the players we’ve got and the way we’ve played at times this season. Macclesfield was a game where we let ourselves down, and I’ve got to make that clear to the players. You can’t just turn up one week and not the next.

“I don’t mind coming out after games and being honest, and I hope the players appreciate where I’m coming from. With the performance they’ve put in tonight, I think they do understand what I’m trying to ask for from them.

“When you come away if you have to take a point you take it. We showed a bit of grit tonight and that’s how it should have been on Saturday. If we did what we did tonight on Saturday we would have won that game. It’s a long season, there’s still plenty to play for and we’ll have plenty of ups and downs.”

And on the 146 fans who made the long journey, he said: “It doesn’t matter how many of them come down tonight, they’ve made a long trip and got right behind us.

“There are so many differences from tonight’s performance compared to Saturday’s performance, and that’s what frustrates you. I’m pleased for the fans who travelled tonight, because we looked a different team compared to Saturday. I totally understand their frustrations, we all want to get out of this division and I believe we should be doing better.

“This league is up and down, I’ve managed at this level for a long time and I’ve always said consistency is the magic word. I think players have got to realise what they’re good at and what they’re not so good at.

“You can make a decent living at this level by doing the basics. That’s exactly what Benno did tonight, I told him not to try and ping it around like Rio Ferdinand or whoever, he defended and did what he had to do.

“I haven’t even mentioned Ash Nadesan yet, but those goals are exactly what he’s all about. There are a lot of positions that are 60-40 in favour of the opposition and he just makes something out of them, that’s what he’s really good at.

“The first goal is a great goal, and when Ash is on your shoulder and gets away from you, you aren’t catching him. The second goal is all about Ash, it’s a lost cause but he finished it really well, and he’s probably the only one who would have scored that goal.

“It’s all about desire and trying to get something from nothing, and he’s probably the best in this division at doing that. He got a couple of bad knocks on his foot as well, so he did well to stay on.”