Midfielders Jerry Yates and Regan Slater were at Stanwix News in Carlisle last Friday afternoon to present the newsagent’s proprietor and Blues Lotto agent Andrew Dunning with a £10,000 cheque, to be passed on to one of his customers who has picked up the top prize in our latest Bumper Summer Draw.

This particular winner wished to remain anonymous, but it was interesting to hear that Andrew, one of our more recent Lotto agent recruits, has had a stream of winners since joining us just under two years ago.

“I’ve been an agent for a couple of years now and I have about 36 Lotto members who I collect from,” Andrew explained. “To be fair, I’ve had quite a few winners out of that, and it’s just brilliant when you tell people you know really well that they’ve been lucky in the weekly, monthly, or in the other prize draws.

“I’m forever dropping off cheques for £10 or £100, and we had a rollover winner who picked up a cheque for over £1,000 recently as well. There doesn’t seem to be a month goes by where I’m not dropping off something to somebody. That tells me that it’s a really good scheme and I’m pleased that I’m part of it.”

“It’s definitely one where I would encourage people to give it a try,” he continued. “The Blues Lotto is supporting good, local causes and, as you can see from what I’ve been saying here, you’re in with a real chance of winning once you join us.

“It’s actually a better chance of winning than you get with the main lottery, so why not sign up and support locally as you do!”

Lottery manager Ewan Wood said: “I’m delighted for Andrew and his customer! Newsagents play an important role supporting the Blues Lotto and we’re always on the lookout for new retailers to get involved. The £10,000 prize is drawn every summer and the winning agent gets a nice bonus too!’’

Remember, you have to be in it to win it!

And that’s not all, your lucky numbers are also entered into our weekly rollover draw where a small prize could potentially build into thousands of pounds! 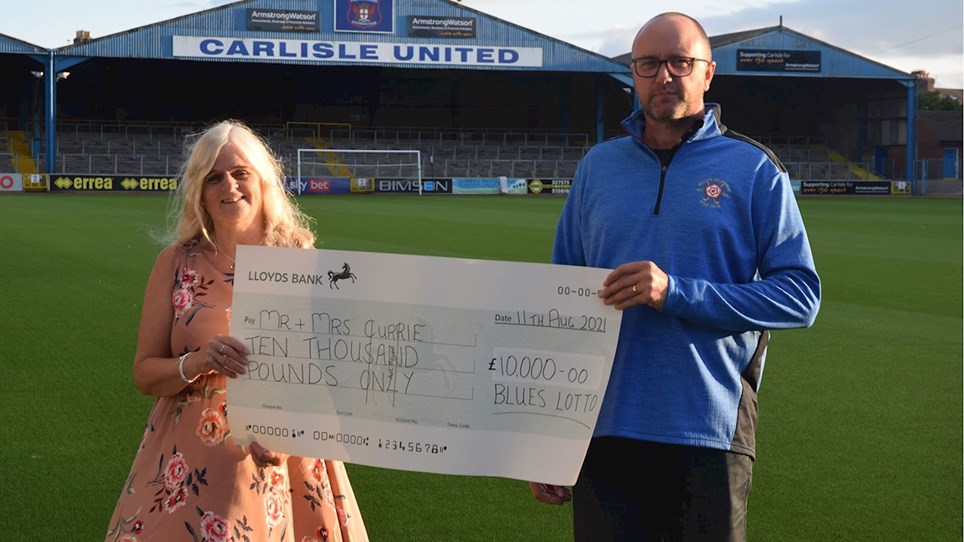 
Martin and Jackie Currie recently had Blues Lotto agent Barbara Hetherington knocking on their door (and, yes, ringing their bell) with the wonderful news that they’d just won £10,000 in the Blues...


Thanks to everyone who supported our lockdown Golden Goal draws last season.