Defender Anthony Gerrard picked up the Peter Jackson the Jeweller man-of-the-match award on Tuesday night, but he was quick to point out after the game that accolades and personal praise mean little if the team has suffered a defeat.

“I hope this doesn’t come out wrong but awards like that mean absolutely nothing when you lose the game,” he said. “It’s like finishing second in a race, there’s no glory in it.

“I’d rather have a stinker and win the game 3-0. It’s a personal accolade that means nothing because we’ve conceded a goal which means we’ve lost the game. If it was 0-0 I could have taken it, because that means I’d done my job. Everything is hard to take at the moment because we lost the game.”

“I suppose that shows how much results matter, and it has to be that way because this is our job,” he continued. “If it doesn’t hurt when you lose then you’re in the wrong environment, because you want to get the most out of each and every game and from every opportunity you get to pull on the shirt.

“I don’t know how many more years I’ve got to play, so I have to embrace it and take every opportunity that comes. As a defender, your job is to keep a clean sheet. We’re conceding some really sloppy, naïve goals at the moment. I can take conceding a wonder goal or a goal after the other team has cut you open with some good play, but it’s frustrating when we’re being beaten by basic Sunday league style goals.

“The goal we conceded against Stevenage, we had men steaming back to get goal side, but it’s about the awareness of noticing there’s a man standing on his own on the edge of the box. If you stand within a yard of him, that ball doesn’t get played to him and he doesn’t get chance to take a shot at goal. It’s silly little things like that which matter.”

“We’ve dropped six points in the last two games which is obviously really frustrating,” he commented. “We knew Grimsby had been on a bad run, but we also knew they weren’t a bottom two side. The first half was a bit scrappy, they had a few chances and we had a few chances, and it could have been 3-3 at half time.

“We came out the blocks well in the second half and we didn’t really give them a chance. In the Tranmere, Stevenage and Grimsby games we just haven’t been clinical enough. We’re creating some fantastic chances, but we aren’t sticking the ball in the back of the net. The game gets decided in both boxes, so it’s frustrating when we aren’t putting these chances away.” 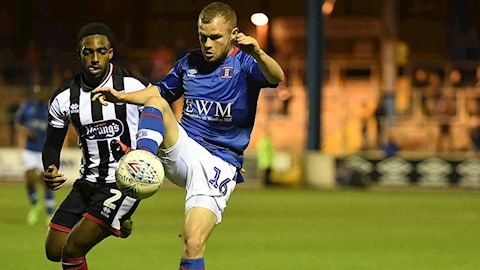 INTERVIEW: I'm desperate to get myself in the team

With the team struggling to find goals at Brunton Park recently, we wondered if that was a statistic which was starting to trouble the players.

“I don’t think it’s getting into our heads that we’re struggling to score,” he said. “Mind you, we’d all prefer it if we were, but they’ve been three close defeats. If they’d happened without us creating chances that would be when we would start to worry.

“If we weren’t getting into good areas it would be an issue, but we’re getting those chances without finding the net at the moment. It’s about that last little bit of quality to get it over the line, and that’s what we need to concentrate on now.

“It’s minor details at the moment. It’s the break of the ball, or the run of things going our way. We need people to be in the right position at the right time, but we aren’t miles away.

“It’s not like we aren’t creating chances and we’re getting drummed by threes and fours. It’s one-goal defeats having missed a hat load of chances. Like I said before, our time will come and we’ll get our just rewards.”

With things so tight in the division the team heads into the weekend knowing that a good result will propel them right back into the upper reaches of the division, with just three points between their current mid-table slot and fourth spot.

“There are highs and lows in this league, it’s just how it is at this level,” he told us. “You need to try to be on an even keel through the majority of the season, and that’s by having consistency in performances, discipline and everything about your game.

“If you keep that you’ll win 80% of your games. I’ve played in leagues where you can lose two games and be out of it but, as it stands, we’re still in a good place. Everyone beats everyone in this league and it isn’t all about quality. It’s about organisation, consistency and discipline.

“Ultimately that’s what gets you promoted. We haven’t got that consistency at the moment, but once we get that, as well as the injured players back, I think we’ll mount a strong challenge.” 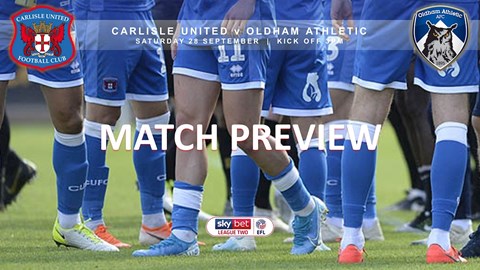 BIG MATCH PREVIEW: A look ahead to Saturday's game

Next up for United is a return to the big defender’s most recent stomping ground on Saturday afternoon.

“With no disrespect, I’ve played in bigger games than Carlisle against Oldham,” he told us. “I’ve had dog’s abuse from 25,000 people so it doesn’t really bother me that it’ll come from the three or four thousand they get.

“I’m a big boy, I’ll take it on the chin, I won’t get riled and I’ll just go there and do my job. Hopefully that will help us to get the three points. It’s just another game to me because I’m playing for Carlisle United now.

“I’m thankful to Oldham for what they did for me, with the previous regime, but it’s a new club and completely different to the one I signed for.

“It’s another game to look forward to and one we want to win. I’m happy with how I’ve been playing, I’ve been consistent, but that doesn’t mean anything if you aren’t picking up points.

“We know we’ve let ourselves down with recent results but there’s nothing you can do about the past. It’s about Saturday and if we produce a performance anything like the second half on Tuesday in 80% of the games this season we’ll be on the right side of the results.”

Click HERE to watch an interview with Anthony Gerrard on iFollow United now.