Defender Gary Liddle spoke to us after full-time on Saturday following the defeat to Morecambe. 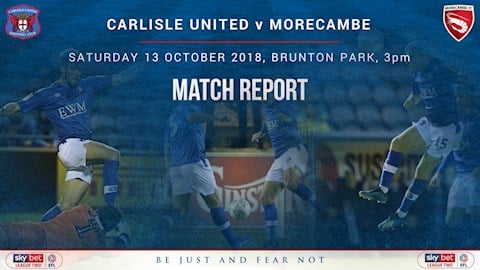 “We go into home games expecting to get points but we’re coming away with the same disappointment that we’ve had for the last four home games," he admitted.

"That’s four games now where we haven’t scored, and they’ve been against teams who you look at on paper and people will have expected us to win, certainly if league position was anything to go by.

"The result is probably fair, I won’t beat around the bush, I don’t think we deserved anything from the game, so it’s one we’ll have to put behind us as quickly as possible."

“We had some chances early on in the game which we didn’t take and, as seems to happen at home at the moment, we conceded two sloppy goals," he continued. "Opposition teams are punishing us with the chances they get and it makes it difficult to get back in it.

"We huffed and puffed and had a go second half, but it wasn’t to be. The message at half time was just to go out and have a go because there was nothing to lose. I think if we’d got the next goal anything could have happened, but it wasn’t to be, and it was another disappointing day at Brunton Park for us."

“We have got injuries but we don’t want to use that as an excuse, because we’ve got a good squad of players who can come into the team at any time," he explained. "Morecambe have probably had more injuries than we have, so we certainly won’t be using that as an excuse.

“Anthony Gerrard is someone who is a shouter on the pitch but we’ve got plenty of experienced lads out there without him. We have other players who can do that, including myself, but I did think Ant was a big miss. Not only for his communication, but they had a big striker up there and if we’d had him there as a dominant centre back it would have helped.

“We’ve done well on set pieces this season, we probably shouldn’t have talked about that in the week, because that was the first set piece goal we’ve conceded this season. That second goal didn’t put the nail in the coffin as such, but it gave us a mountain to climb."

“We need to bring the away form that we have at the moment back here in front of our home supporters," he told us. "It’s obviously disappointing to not be winning your home games because that’s what your season is built on really.

"Any results you can pick up away from home then become an added bonus. The sooner we can rectify the home form the better, and the better chance we’ll have of being at the right end of the table.

“It’s difficult to say why our away form is so much better than our home form. It’s been like that for a couple of years now and it’s difficult to understand. When you’re the home team the onus is on you to go out and create chances, and I don’t think we’re not doing that, it’s just that we’re struggling to convert them at the moment.

"In any game, teams are going to get chances against you, whether you’re at home or away. As we are at the moment, when we come under those spells of pressure at home, teams are punishing us.

“We got a great result away at Oldham last week who are one of the fancied teams in the league, so we all went into Saturday's  game in a positive frame of mind. When you come back to your home ground after an away victory you just hope you can back it up and get a run going.

"I think our form at the moment is W-L-W-L-W-L, so we aren’t drawing many games. That’s why we find ourselves smack bang in the middle of the table. The manager and his staff have all said that they haven’t come here to finish mid-table. The league is wide open this year, anyone can beat anyone, which has been proved throughout the league so far this season."

“The grumbles from the fans are understandable," he admitted. "It’s difficult for them because they’re coming to watch us on the back of a good result at Oldham and expecting a similar performance.

"They’ve been great for us at home and away, so it’s disappointing that we’re not getting wins or even scoring goals for them at home. We’ve spoken about it after the game and some home truths have been said in the dressing room. Good home form is something we need if we want to do well this season."

“This week is about preparing for Macclesfield, because that will be another tough game," he added. "They haven’t had a decent start to the season, but we’ve played a lot of teams recently who we’ve said that about, only to come out of it without any points.

“We have to go into the away game at Macclesfield and put our home form to the back of our mind. For whatever reason, we’re doing well away from home, which isn’t usually the case.

"We have to make sure we continue that, so we’ll prepare well for Macclesfield. We’re going into away games looking for a result rather than trying to impress, which is maybe something we need to bring into the home games, rather than trying to play the slick football which we try and do.

“You do look at the home form compared to the away form and wonder where we would be if we could get some results at home. If you look at the points we’ve thrown away because of key chances we’ve missed, or bad goals we’ve conceded, we would probably find ourselves in the top part of the league without that. I’m sure that’s the same for every team, and it’s easy to look back with hindsight."

With Brunton Park taking a moment to reflect on one its favourites, with a minute of applause for Tony Hopper, the defender admitted that it had struck a real chord with his good friend Stephen Darby also having been diagnosed with MND recently.

“It does put things into perspective when you’re having a minute’s applause before the game for an ex-player who was only 42 when he passed away," he said. "I never had the pleasure of meeting Tony but I’ve heard some great stories about the type of man he was.

"He was a good friend of Dolly’s and he’s told me some great stories about him. I think he had the same condition my good friend Darbs [Stephen Darby] has got. I spoke to Darbs during the week and mentioned Tony, which was a difficult conversation to have.

"I’m sure today was a sad day for Tony’s family and friends, but I thought it was a good send off for him."